A woman who was inside a Bank of Montreal in Saanich during a shootout that killed two suspects and injured six police officers Tuesday says there were three suspects and nearly two-dozen people held hostage.

Shelli Fryer had just sat down for an 11 a.m. meeting with the bank’s branch manager when suddenly, armed robbers with assault rifles burst in.

“There was an incredible explosion,” she told CHEK’s Kori Sidaway. “I looked and I saw that the tellers had gotten down.”

Fryer said shortly after that the branch manager calmly told her that the bank was being robbed and went to grab a vault key. She said as she went to hide under her chair she noticed a man standing by the office door.

“As he got the key, I said ‘should I get down? and he said ‘just a second,'” she recalled. “And then, I look up and in the doorway is a guy standing there with an assault rifle, balaclava vest, some guards on his legs, just standing there quietly.”

After a few moments, she said the suspect eventually made the manager walk with him to the vault, leaving her all alone.

That’s when Fryer said she heard another voice, realized “there were at least two” suspects inside the bank and called 911 but had a hard time communicating with the dispatcher.

“I grabbed my cell phone and called 911. I whispered and whispered,” she explained, adding that at the time she told the dispatcher there were two suspects and that there was an “open line the whole time.”

Fryer said she must’ve been in the manager’s office for five to 10 minutes and was completely alone as everyone else she had seen earlier had been moved to another section of the bank.

“They said ‘move to the vault’ and everybody got up and everybody cleared out,” recalled Fryer. “But they forgot about me. I was just left there and while I was there … one gentleman just paced back and forth in front of the bank. I was watching him as I was cowering by the chair, slowly, waiting calmly and it was silent.”

RELATED: Explosive devices found at scene of Saanich bank shootout have been destroyed

At some point, Fryer said one of the assailants noticed her and told her to go with everyone else who had been corralled together and were at the back of the bank.

“He saw me. He motioned me to come out and as I came out, I saw another gunman and then I checked myself that oh my gosh ‘I’ve left my cell phone [in the office] … and I can’t alert the police that there are three suspects, not two,” said Fryer, who is adamant that there were three suspects.

After waiting for what seemed like forever, Fryer said she and the others heard gunshots.

“It was police and then gunfire and we were cowering … and then it was silence and then the police came into the building,” she said, adding. “It wasn’t the frenetic, crazy, chaotic, what you imagine, it would have been.”

As police began clearing the scene, Fryer said she saw employees who had been hiding in another office and a pregnant woman who had been in a closet. She also said officers were apologetic to everyone inside the bank.

“When they came in, every single police officer said they were sorry this happened to you,” recalled Fryer.

Law enforcement has released few details but has clearly stated there were definitely two suspects and possibly a third. They have also provided limited information about the condition of the six officers who were hurt or if it was a hostage situation.

However, Fryer remains adamant that there were three suspects. She also said there were nearly two dozen people held hostage inside the bank.

“There were 22 people being held hostage in the bank by three men in gear and assault rifles,” said Fryer.

Watch an extended interview clip with Fryer below: 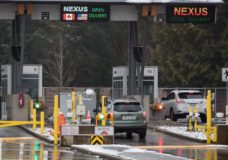 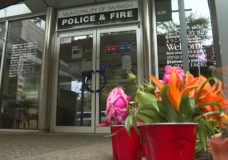 Support for Vancouver Island police pours in from across the country