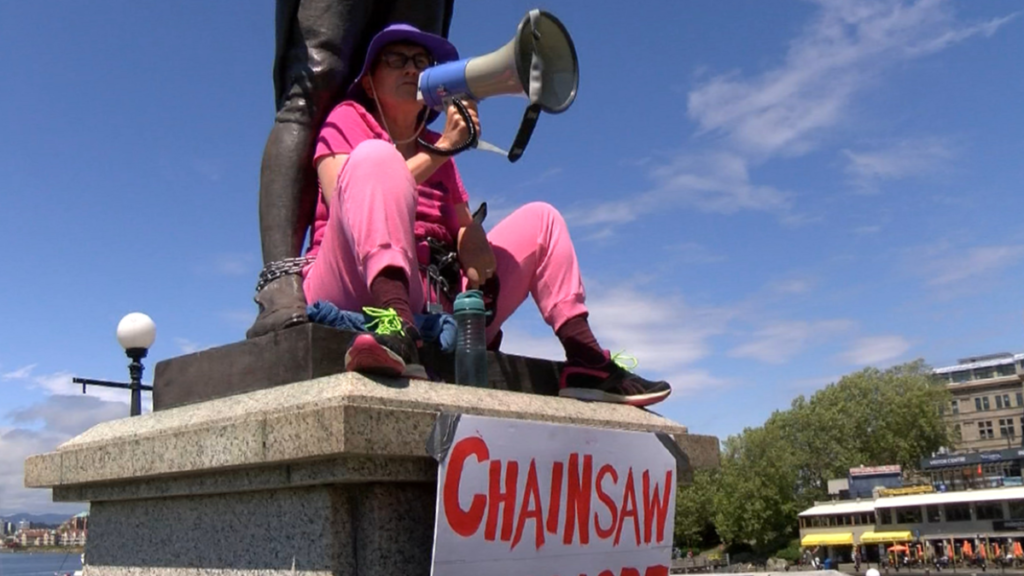 CHEK News
Tasha Diamant, 59, chained herself to the Captain James Cook statue, located across from the Empress Hotel in downtown Victoria on Saturday afternoon, and criticized the RCMP for arresting Fairy Creek protesters.

A mother of two with Stage 4 cancer chained herself to a downtown Victoria statue in a show of support for those protesting logging activities in Fairy Creek.

Tasha Diamant, 59, chained herself to the Captain James Cook statue, located across from the Empress Hotel in downtown Victoria on Saturday afternoon, and criticized the RCMP for arresting Fairy Creek protesters.

“Our tax dollars are being spent on RCMP, including gang enforcement, arresting non-violent forest protectors,” Diamant said through a megaphone in front of a handful of onlookers.

Fairy Creek is a pristine watershed — located between Port Renfrew and Lake Cowichan — that has been the centrepiece of a lengthy battle between anti-logging demonstrators and forestry company Teal Jones.

More than 50 people have been arrested ever since RCMP began enforcing a B.C. Supreme Court injunction ordering the removal of blockades protesting old-growth logging in the Fairy Creek Watershed last week.

Diamant told CHEK News that what has been happening to the Fairy Creek protesters is wrong and blamed Premier John Horgan and Prime Minister Justin Trudeau for allowing the RCMP to conduct, what she believes, are illegal arrests.

“Those people are non-violent for us protectors doing the job, the Premier promised to do himself,” she said. “And instead, the Premier and the Prime Minister have brought in the RCMP, who have been doing illegal arrests, in some cases, brutal arrests, targeting indigenous people and keeping the media and legal observers out.”

Asked why she’s chained to the Captain Cook statue, Diamant said it’s because some of the trees the Fairy Creek protesters are trying to save were not only around but were considered ancient when the explorer first reached Vancouver Island back in the 1770s.

“Some of those trees those people are up there protecting, we’re already ancient,” she said “We’re talking a thousand to 2,000-year-old trees, definitely many trees over hundreds of years old.”

Diamant also said that as a mother and someone with Stage 4 cancer, she believes she must voice her concern for what has been happening to Fairy Creek protesters. 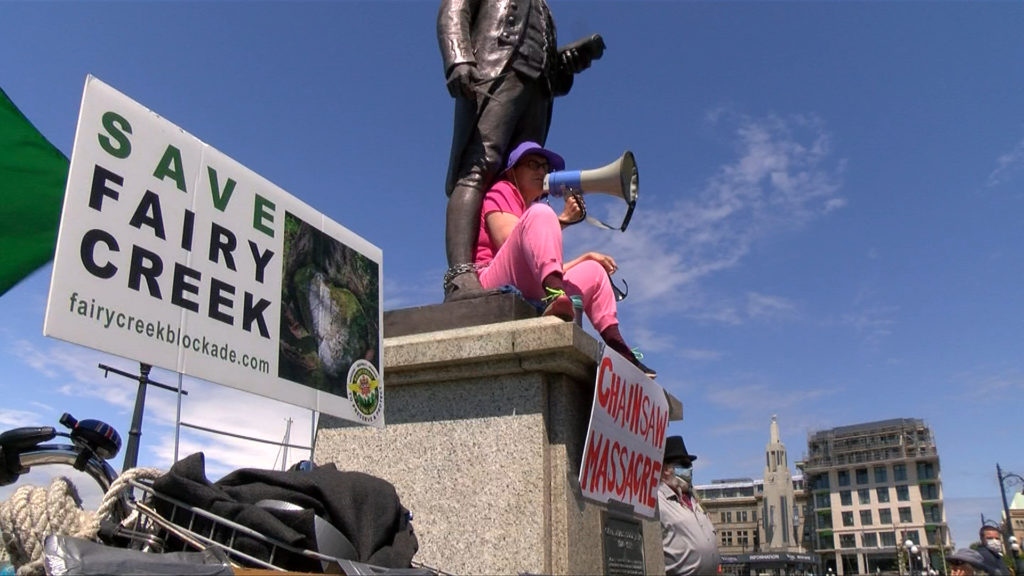 Tasha Diamant, 59, chained herself to the Captain James Cook statue, located across from the Empress Hotel in downtown Victoria on Saturday afternoon, and criticized the RCMP for arresting Fairy Creek protesters. (CHEK News)

A woman has chained herself to the Captain James Cook statue in downtown Victoria in “solidarity” with those at Fairy Creek.

“Those are nonviolent, peaceful forest protectors,” she says. 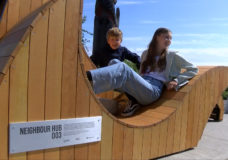