Posted: Nov. 5, 2020 6:01PM | Last Updated: Nov. 5, 2020 8:05PM
CHEK
WatchAn international chain of supermarkets is banning employees from wearing poppies this November while working. On Wednesday, Whole Foods ordered staff to take them off, saying they are not part of the uniform. Mary Griffin reports.

At a Whole Foods store in Saanich, staff are issued a uniform and it comes with a name tag.

But this November, no poppy can be on a Whole Foods uniform. The company’s policy prohibits staff from wearing them at work and it’s become a sticking point for some that work there and those that shop there as well.

“The updated company dress code provides our Team Members with one simplified and unified policy to follow when working in our stores. Like many of our policies, our dress code is in place to ensure that we are prioritizing operational safety and serving our customers by keeping the focus in our stores on selling the highest quality food and fulfilling Whole Foods Market’s purpose of Nourishing People and the Planet,”

“All Whole Foods Market stores in Canada are proud to be donating to the Legion’s Poppy Campaign this year in honour of Remembrance Day. In total, we are donating more than $8,000 across our stores. Team Members will also have the opportunity to select the Legion to receive additional funds from their store location as part of our community giving program. As in previous years, we invite those in our stores to join us in observing a moment of silence on November 11, at 11 a.m.,” the company said.

“I’d love to see everybody with a poppy on,” said Angus Stanfield, a volunteer in charge of poppy sales for the Royal Canadian Legion in Greater Victoria.

He said he’s heard about concerns from grocery stores regarding poppies as the pin can be sharp if the poppy falls off clothes. But there is a solution.  The pin in the centre of the Legion’s standard poppies can be removed and replaced with a lapel pin, so there is no sharp pin.

But so far, there have been no requests for the pins from any grocery store.

“But I think that is easily explained. I don’t think they would be aware of it. We have a few hundred of these right now. We’ve been selling them for two dollars a piece just to help the campaign,” Stanfield said.

Island Health has also is not aware of any food safety policy preventing staff from wearing them while on shift at grocery stores.

The lapel poppies are available at most Royal Canadian Legions until Nov. 11. 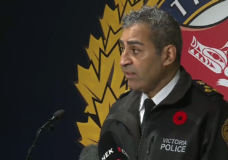 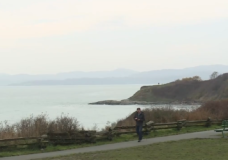 Tips to keep mentally healthy in a COVID-19 winter