The amount of shoreline at Comox Lake is growing by the day as water levels continue to drop dramatically.

“It’s been very dry going into October now, one of the driest periods we’ve seen in our historical records for our hydroelectric facilities on Vancouver Island,” said BC Hydro spokesperson Stephen Watson.

The water level is dropping four centimetres a day, so BC Hydro is reducing water flows from the reservoir into the Puntledge River to eight cubic metres a second Wednesday. That’s half of what the bare minimum normally is for fish habitat.

But it’s an unusual year and all of Vancouver Island is in Drought Level 4, meaning “adverse impacts are likely,” the province says.

“The challenge is the Comox dam is about 300 metres from the outlet of the lake and there’s some woody debris and thatch material that can block some of that area, so the flow in the channel can get constrained leading down to the dam,” added Watson.

“So that’s where we’re getting concerned potentially about how much water could move through to the dam.”

Many naturally fed rivers are also seeing low water levels that can become too warm for fish to survive or too low for fish to migrate.

“That’s the concern right now that the water is so low that they’ll have a hard time navigating upstream,” Wayne White, Tsolum River Restoration Society president, told CHEK News in an interview in the dry riverbed Tuesday.

“Normally this time of year, October 4th we’d be standing in water right now if the normal rains would come.”

But Environment Canada says there is still no significant rain in the forecast.

“In the near-term, we don’t see too much in particularly for Vancouver Island or the southwest of B.C. This week is remaining warm, dry, temperatures above normal,” said Meteorologist Alyssa Charbonneau.

She said there is a chance of light rain next week, but it’s too far out to be sure and that the models support a drier and warmer trend continuing.

Victoria and Comox just had their warmest September on record, and many Vancouver Island rain gauges were in the top five on record for the driest.

Water restrictions are still in place for many municipalities and the Regional District of Nanaimo has moved to Stage 4, meaning no lawn sprinklers or washing vehicles at all. 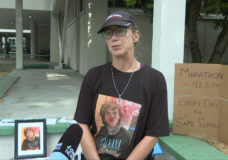 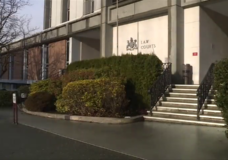