‘We don’t have the option of going home’: Island athletes stranded in South Africa due to omicron variant

Posted: Nov. 27, 2021 6:32PM
CHEK
WatchFive Vancouver Island field hockey players were set to represent their country on the world stage, but as Kevin Charach reports, a new COVID-19 variant now has them on standby for a return trip home.

Victoria’s Nora Struchtrup is one of five Vancouver Island field hockey players who were set to represent Canada next month on the world stage.

“We’ve never, like no one on our team, has ever been to a tournament this big,” said the 19-year-old.

The Canadian Junior Women’s National Field hockey team were set to compete in South Africa for the Junior World Cup. But the tournament, scheduled to start next week, was abruptly cancelled due to a national health emergency.

“I woke up [Thursday] and my teammates told me about this new super variant at breakfast they found in South Africa,” said Struchtup via Zoom from Potchefstroom, South Africa. “Literally less than 12 hours later we found out right after training that our tournament was cancelled and that we had to try and get back to Canada as soon as possible.”

Several countries have issued travel bans and restrictions due to the new COVID-19 Omicron variant, first reported in South Africa on Wednesday.

So for now, the team is trying to stay positive in a bizarre state of limbo.

“We don’t have the option of going home and we’re training for a tournament that isn’t happening,” said Struchtrup.

Although no cases have been reported yet in Canada, federal officials are taking precautions regarding travel.

Government officials reached out to the team to provide support, but have yet to indicate a timeline of when the team will be able to return home.

“Minister St-Onge spoke directly with the Hockey team today and our government will remain closely in touch with team if they request assistance,” said Christelle Chartrand, spokesperson for Global Affairs Canada.

“Canada is prioritizing the health and safety of all Canadians by continuing to take a risk-based and measured approach to re-opening the border. As part of our effort to keep Canadians safe from COVID-19 and its variants, the Government of Canada’s emergency border measures have been effective in reducing the importation and transmission of COVID-19 into Canada.”

The team, meanwhile, is staying patient and hopeful.

“We’ll keep our fingers crossed that it’s sooner rather than later,” said Mollenhauer. 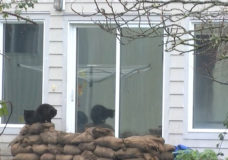