WATCH: A Victoria woman is sounding the alarm about vicious urban raccoons. She says one tried to kill her dog recently, and on Friday, her dogs have attacked again only this time she was also wounded. She’s recovering from her wounds but as Luisa Alvarez reports, she’s now afraid to go into her own backyard.

Wendy Varga and her little dog are recovering from a traumatic raccoon encounter.

“If you look at her face its all swollen up there’s a puncture on her snout and a puncture by her eye and she is on anti-inflammatory and painkillers but she’s not feeling very good,” said Varga.

It happened Friday night right in her own backyard.

“The raccoon had her pinned on the ground beating her and I thought oh my goodness it’s going to kill her. She’s a five-pound dog I looked around there was nothing handy a broom or anything and I’m not going to stand by and let it kill her,” said Varga.

That’s when Varga intervened to save her dog’s life but the raccoon didn’t scare easily.

“It turned and lunged straight at me grabbed my foot with its claws sunk its teeth right into my leg and my sock was soaked in blood,” said Varga.

Varga ended up going to the ER and is now recovering from her wounds but she says its frustrating because it’s not the first time her dogs almost lost their lives because of raccoons.

“They came out covered in blood. The one puncture on the 6-pound dog was approximately an inch and a half deep.”

Varga had to rush them to the vet and had to foot the $800 bill.  After that incident Varga contacted pest control who suggested the raccoons were using her cedar tree line to hide, right away she took measures to deter them from getting in by putting chicken wire along the entire perimeter where the cedar trees are but that hasn’t really worked.

“My dogs are afraid and I’m afraid to go into the backyard at night,” said Varga.

Varga says she was told her only other option was to have them trapped but that costs $200 per raccoon and they euthanize them which is something Wendy also doesn’t want.

“I’m not sure what anybody can and should do with this I think the first thing would be nice if they had an actual count of them.”

Varga says at least knowing how many there are around would be helpful to start a conversation about what could be done to help keep people and pets safe. 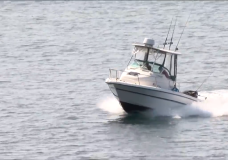 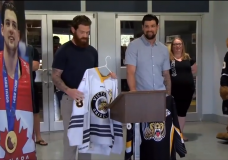