Victoria ride-hailing app launches ahead of Uber and Lyft

August 17, 2019 updated
CHEK
WatchWATCH – A local company has launched a ride-hailing app on the south island using licensed taxi drivers who are already employed for other companies.

A local ride-hailing company says it has beaten Uber and Lyft to the capital city market by targetting taxi drivers.

The app and company, called Lucky to Go, uses licenced taxi drivers who are already driving for other companies.

“What makes us so different from anybody else, is that I have opened up the platform to the taxis to be involved first,” said Mandeep Rana the company’s CEO.

The app, which is simlar to Uber, tells users which taxi is closest as well as the estimated time of arrival. It also allows people to select the size of vehicle they want.

Passengers pay the regular taxi fare and cannot pay through the app.

Victoria Taxi told CHEK News while it doesn’t encourage its drivers to work for Lucky To Go, it isn’t stopping them from working for the company.

The company wants to eventually offer designated drivers and food delivery as well.

Earlier this week, ride-hailing company Lyft announced plans to be operate in Vancouver before the end of this year, but it remains concerned about expanding beyond the Lower Mainland.

The Passenger Transportation Board in B.C. has yet to unveil its final ride-hailing regulations, but a statement from Lyft says the company is confident its operations will begin in the Lower Mainland sometime this fall.

How a B.C. mayor plans to rank reefer at the fall fair 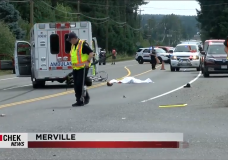