July 12, 2020 updated
Chek
WatchVictoria Police are facing backlash after tweeting that alleged victims of sexual assault should come to them before posting on social media.

A recent string of sexual assault allegations made online has led to the firing of several tattoo artists around the country.

“In these sorts of situations, it doesn’t really start to come out until survivors start to speak about what’s happened. I really want to commend the sexual assault survivors that have come out and spoken so courageously,” said Carissa Ropponen of the Victoria Sexual Assault Centre.

In a series of tweets on Friday, Victoria Police suggested other victims, wanting to pursue a criminal process, to come to them first, before posting on social media, or speaking with the media.

The thread has received push back.

If you may want to consider a criminal process, it is important to know that for potential future court processes, it is best that you provide your statement to the police prior to speaking to any media outlets or posting details of your story publicly on social media. (4/9)

Former Whitecaps FC player, Ciara McCormack said, 11 years of complaints and reports about abuse from a coach within the organization saw no action from authorities or the team, but a single blog post detailing the abuse in 2019 did.

“Nothing was done until I posted my blog. He was suspended the next day. Truth shared pubcly equals accountability and protects others,” she wrote in a tweet Friday.

Advocates for victims of sexual assault like Ropponen agree.

From a legal standpoint, lawyers say there are legitimate reasons to go to the police first, particularly if criminal justice is what the complainant is after. However, lawyers also say going elsewhere first will not prevent charges from being laid.

“Police want to be able to memorialize a report in a way that’s attentive to the various details and aspects which complainants may not know is important. But for those who choose not to do that first, for those who have reasons to go to other places for support, they can still proceed,” said the University of Victoria law professor Michelle Lawrence.

VicPD declined to comment to CHEK on the matter but in later tweets posted on July 10, the department said those who are unsure whether they want to file a report can reach out to police or the Victoria Sexual Assault Centre.

“We want everyone who has experienced sexualized violence to know that if you report what you’ve experienced to our Special Victims Unit (SVU) detectives, you will be listened to, you will be treated with respect, & you will be believed,” VicPD said in one of its tweets posted on July 10.

None of the allegations against the tattoo artists have been proven in court. 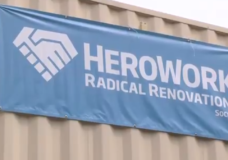 CHEK Upside: 'They really saved me:' Local charity helps other organizations with renovations