October 22, 2020 updated
CHEK
WatchVictoria's mayor is calling on landlords to help provide housing to those already in supportive housing to then free up space for homeless campers. April Lawrence explains.
Steve L’Heureux has lived in Our Place Society’s supportive housing for three years. The help he’s received there is a gift he says allowed him to turn his life around.

“I quit drinking, I don’t do drugs, and I’m happy,” L’Heureux said.

The 53-year-old says he’s ready now to move on and is trying to find his own bachelor apartment.

“I want a quiet neighbourhood, I want to see little kids playing and stuff, I’ve seen this other side of the world for far too long, my life has changed,” he said.

“It would be really nice to have a place where I could cook my own meals.”

Victoria’s mayor says finding people like L’Heureux their own private rental suites is actually one of the key ways to solve the current camping situation in city parks. She says it’s a process called ‘positive flow’.

“In some ways, they’re over housed because they don’t need the supports anymore that come with the units they’re living in. They’re ready to live independently then those spaces can be freed up for people who are living outside and who may need a few more supports,” she said.

It’s a part of a plan Helps says she is working on with Island Health, BC Housing and the CRD to move roughly 200 campers out of parks and indoors by Dec. 31.

“I think it’s a very ambitious goal what it relies on is vacancies in the rental market,” she said.

Helps says BC Housing is offering 110 rent supplements that will allow people to afford a market rent between $750 and $825 dollars per month, well below the average rental rate in the city.

If they can be found and people moved out, it will in turn free up 110 spaces in supportive housing for those currently sleeping in parks, with priority given to those who’ve been homeless the longest and are the most vulnerable.

On top of the supplements, Helps says there will also be 60 spaces opening next month in new CRD-funded buildings in View Royal and Langford and 24 new spaces for men wanting to get into treatment at Our Place’s Therapeutic Recovery Community in View Royal.

All told it’s nearly 200 new spaces but to make it happen they have to find landlords willing to jump on board. So far only seven rental units have been secured.

L’Heureux knows just how hard it can be.

“Problem is having references and a lot of people would stereotype you as thinking if you live at Our Place you must be a drug addict but you know I’m living proof that life can change,” he said.

And he hopes he can find a place to move on so that someone who needs help as he did three years ago gets that same chance. 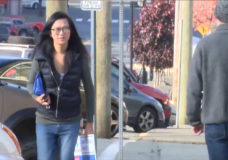