Posted: Nov. 24, 2020 6:56PM
CHEK
WatchThe pandemic has left many workers and industries in need of help. Among them are airports, who are now in real trouble with the virus keeping people out of the air and stuck at home. Ben Nesbit has more on the call for assistance to the Canadian government and what could happen if that call isn't answered.

Like all Canadian Airports, Victoria International is struggling mightily as travel restrictions brought on by COVID-19 have kept passengers away.

Passenger traffic at YYJ from March to October was down 81 per cent compared to the same period last year and it is estimated that YYJ will lose $22 million in revenue for the year.

But Geoff Dickson, president and chief executive officer of the Victoria Airport Authority, says YYJ is actually one of the few medium-sized Airports not yet operating in debt, at least for now.

“We’re technically going to be out of cash by spring of 2021,” he said. “Then we’re going to be in a position of accessing a line of credit to keep going.”

Airports across the country are seeing similar downfalls, seeing only 10 to 15 per cent of their usual passenger traffic. Industry experts forecast Canadian airports as a whole will lose up to $4.5 billion in 2020 and 2021 combined.

The majority of Canada’s airports are not subsidized by the federal government, relying instead on revenue generated from passenger air travel, and have not financial assistance from the feds – prompting calls from the Canadian Airports Council for that to change.

The organization, which represents more than 100 airports nationwide, is asking the government to implement a COVID-19 testing program at airports to reduce or eliminate quarantine restrictions and provide interest-free loans or direct operational support for airports, among other measures.

“These airports are not-for-profit organizations, they operate at arm’s length of government, and the passengers generate the revenue that allow that to be a stable valuable business,” said CAC’s president, Daniel-Robert Gooch. “Well those passengers have gone away and so airports have very limited levers in which to manage that.”

Rapid testing at airports has proven to be successful in other parts of the world, and Dickson, whose also a prominent member of the CAC, thinks it could be a major breakthrough for Canadian Airports if approved here.

“In the aviation world there’s risk and this is just another level of risk and the way you manage risk is you put in layers of protection and another layer of protection in addition to all the things we’ve done in at the airports and on the aircrafts, would be rapid testing so people have some degree of certainty,” Dickson said.

When more passengers do start to return, there’s a growing concern that there won’t be enough workers to help meet the demand.

Canada’s airports supported nearly 200,000 jobs prior to the pandemic, however, it’s believed that roughly half of those jobs have been lost.

“That’s a concern because when the industry bounces back and people want to travel again. We want to make sure were there to receive them, that we have the skilled workers that we need in our sector to to be able to support a return to a growing, vibrant, air traffic sector,” said Gooch.

The federal government has indicated its willingness to provide a sector-specific aid package for the airline industry but has not released any details about its plans. 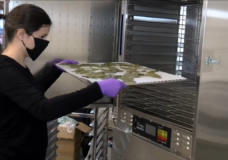