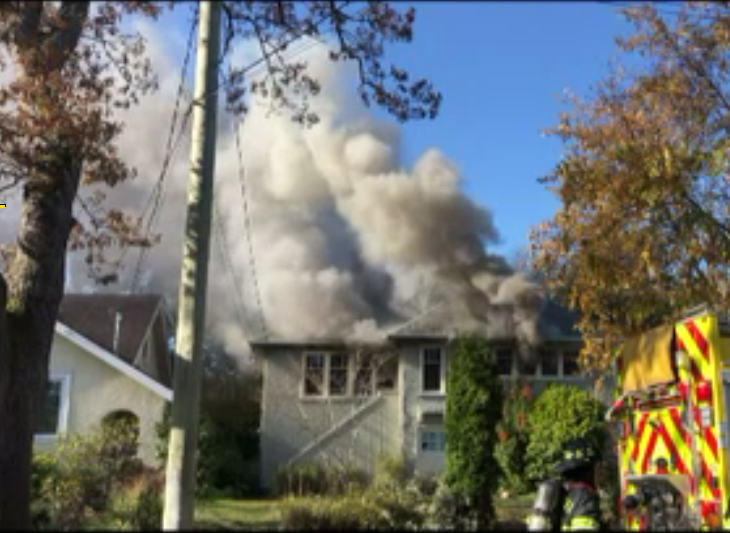 A fire in Victoria on Saturday has displaced residents and sent one man to hospital suffering from smoke inhalation.

Emergency crews responded to the fire at 1524 Davie Street shortly after 12:30 p.m. and were met outside by a man who was an occupant on the main floor of the house.

“He advised us that everyone was out of the house,” said Victoria Fire Department Acting Battalion Chief Oscar Pohl. “It was apparent he had suffered some kind of smoke inhalation.”

The man was taken to hospital shortly after, and arrived at hospital by 12:49 p.m.

Pohl said that the fire sent heavy smoke into the neighbourhood and caused significant damage to the interior. “There was heavy smoke coming down Oak Bay Avenue as we rolled up,” said Pohl. “As we arrived the front windows which turned out to be the kitchen area blew out.”

Pohl said that the fire will displace the male occupant from the main floor, along with residents from a basement suite that the Victoria Fire Department were not yet in contact with.

The fire also displaced some household pets, according to Pohl. “The occupant was able to rescue his dog,” said Pohl. “Crews searching the basement found a cat in the basement. Both animals are being taken care of by a neighbour.”

No other injuries were reported from the fire. The cause of the fire is not yet known.

Guinean-Canadians in Montreal protest possible third presidential term
Police say bodies of a father and son were found in a Coquitlam, B.C., home