July 8, 2020 updated
CHEK
WatchA new handyDART bus depot is in the works for View Royal, but some say the plan misses the mark. The property earmarked for the new build is currently being used by the Victoria Bowmen Archery Club. Jasmine Bala has more.

After shooting on their View Royal outdoor range for a decade, it’s time for the Victoria Bowmen Archery Club to pack up their bows and arrows.

“We have to move as of the 1st of September because of BC Transit moving in here to build their handyDART facility,” said Al Wills, president of the club. “We’re pretty ready to move, [we’ll] bring in some garbage containers in the middle of August, load them up and we’ll be out of here.”

The group built their outdoor range on Burnside Road West back in 2010, spending $60,000 to turn it into what it looks like today.

“We don’t have an outdoor home now, we haven’t been able to find anywhere else,” said Wills. “So we’ll be stuck with school yards and places like that for temporary tournaments, that means bringing in all equipment, setting it all up, then taking it down when we’re done.”

The club still has its indoor home at the Saanich Commonwealth Place, but it’s not the same as having an outdoor range.

“Outdoor is really where it’s at. That’s where our members want to be,” he said. “The fresh air, the wind  – adjusting for those kinds of things – sun, brightness and darkness, and rain and all that stuff.”

In the Olympics, archers shoot outdoors as well, 70 metres away from targets. The group’s set up at View Royal is the same and over the years they’ve produced a few Olympians.

“For a club that is fairly small from a fairly remote area to have four Olympians in 16 years is really, really an accomplishment,” said Wills.

The Victoria Bowmen Archery Club is still hoping to find a space for their outdoor range that would work and fulfill all the safety requirements.

“We need it to be something the community helps out with, like a recreation association,” Wills explained. “It can’t be a farmers field, it can’t be a school yard. It’s got to be some place that’s sort of off on the side.”

But for now, the long-standing group is out of options.

The club started in the early 1950s’, shooting in Cuthbert Holmes Park.

They relocated several times over the years, and finally found what they thought would be their forever home in View Royal in 2010. They received a license to use the property from the Provincial Capital Commission, but then the commission dissolved in 2014.

A few years later, BC Transit put forward their proposal for a new handyDART facility that would go on that same land. View Royal council received many letters and phone calls from residents who were against the logistics of the facility.

“Certainly in all the years I’ve been on council, we’ve never had an issue that generated as much correspondence as that one did,” said the town’s mayor, David Screech.

“[It is] very, very close to the proposed site,” said Screech. “You can see the site runs off into the creek just by looking at water flow on the site … How do we make sure that no runoff from the site ever goes near the creek and damages that sensitive ecosystem?”

After listening to these concerns, View Royal council rejected BC Transit’s rezoning application in 2018. Then the province stepped in.

“The minister of transportation used her authority to essentially impose the land use on View Royal,” said Screech. “So it was taken out of View Royal’s hands and the province made the final decision.”

Screech added the smartest course of action is to stop fighting the inevitable, but work with B.C. Transit and the province to address these concerns.

“The province has made it very clear that they’re not going to change their mind,” said Screech. “So I think now it’s incumbent on us to work to make it the best we possibly can for everybody, including the creek.”

In a statement to CHEK News, the Ministry of Transportation and Infrastructure said demand for transit is growing and because Greater Victoria has limited space for new or expanded commercial and industrial development, this was the best place to build.

“The new location is centrally located, near main roadways that connect all corners of the Greater Victoria, including the western communities,” the ministry said, adding that they along with BC Transit are “committed to ensuring the new facility is built to the high standards required of the town and are working collaboratively with the community.”

The ministry also pointed out that a neighbourhood working group has been established to work with the project team. 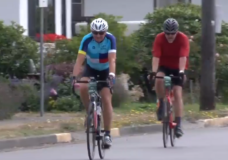 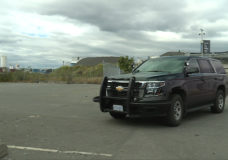