For the last few nights people have gathered in a downtown Courtenay parking lot.
Binoculars and cameras in hand, they gaze skyward. Their long lens cameras waiting for the perfect shot.
“It’s pretty exciting” said photographer George Bowron. “I’ve never seen or heard of anything like this before.”
“Well it’s the first time I’ve seen that and it’s really quite interesting.” said birder Barry Hall.
Their eyes and cameras are trained at the chimney, atop the Courtenay museum
“They’re Vaux Swift, similar to the Eastern Swift which is a chimney swift” explained Courtenay Museum curator Pat Trask, who normally deals with dinosaur bones. “These guys migrate from down south, California, Mexico and maybe even South America, not sure exactly where they come from but I know they’re going on their way to central or northern British Columbia.”
The Vaux Swift, thousands of them put on an aerial display lasting about 30 minutes at dusk, then as if on cue, they dive into the chimney, their nightly resting spot until they decide to continue their journey north.
So whey did they choose this particular chimney?
“Probably the same reason you choose your house” said another birder Terry Thormin. “I mean obviously it’s probably a good sized chimney with lots of room for all of them and probably essentially good accommodations.”
“They roost in certain spots at weeks at a time and typically in hollow trees but there aren’t a lot of hollow trees anymore, we’ve knocked them all down and so they like to roost in chimneys.” added Trask.
And under a pastel sky Friday night they keep coming and coming from every direction until the last Vaux Swift enters the chimney and says good night.
“I’ve been birding since I was 14, meaning 60 years and I’ve never seen before.” added Thormin.
“Most interesting” said onlooker Michelle Stewart.  “I’ve seen Swifts before but never of this number and never going down into a chimney. That is really cool.”
The birds are expected to stay in the area until about the end of May.
You can catch the spectacle every evening at sunset behind the Courtenay Museum on Fourth Street. 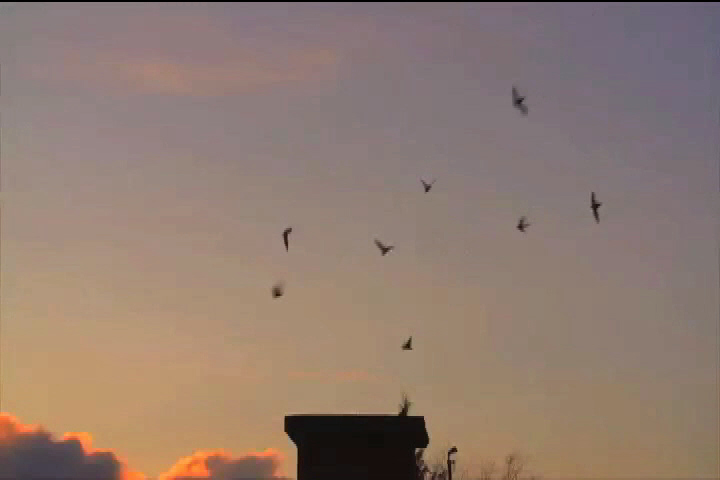 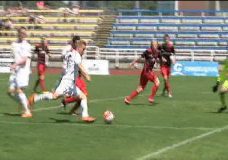 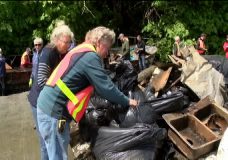