WATCH: It’s tradition more than science but Groundhog Day is a good excuse to check in with the Vancouver Island Marmot Recovery Foundation’s efforts to bring the endangered mammals back from the brink of extinction.

The Vancouver Island Marmot Recovery Centre is nestled deep in the snow on the side of Mount Washington where 34 captive marmots are currently hibernating for the winter.

Elsewhere on the island, there are about 200 wild marmots. They are Canada’s most endangered mammal.

“We’re still looking at a population that’s increasing really slowly and is still extremely vulnerable so we still have work to do and you’ve seen some of that today to try to get this population of marmots back to a spot where it’s stable,” said Adam Taylor of the Vancouver Island Marmot Recovery Foundation.

In the early 2000s, there were only 30 marmots left in the wild on the island.

“From a marmot’s perspective this is a great winter,” said Taylor. “Lots of snow provides a nice deep pack of insulation for their burrows. They’re going to be under two metres or more of rock and soil underneath that.”

Saturday is Groundhog Day so not to be outdone by their eastern weather prognosticators, CHEK asked about the science of groundhogs and shadows, and there is none. While the tradition remains very popular, studies have found no conclusive evidence or a consistent correlation between a groundhog seeing its shadow — or not — and the weather.

You might as well be inside and make your own shadow like our camera lights did Friday.

“Now thank you for showing up with your camera and casting a nice bright shadow there that our marmot clearly saw so it’s bad news on the weather front,” said Taylor.

Six more weeks of winter. Or not. 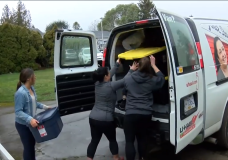 Housing bylaw that evicted UVic students will be up for review on Monday, says mayor 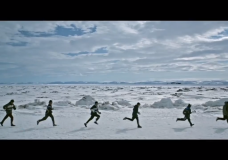