Late December snows are drawing backcountry skiers and snowmobilers into the mountains on Vancouver Island.

Wes Dunn and Carrie Steiman hit the snowmobile trails on Mount Washington Saturday and had snow-safety in mind.

“Well, we always check the weather report before we go and see what the avalanche rating is,” said Steiman.

The avalanche risk rating right now on the island is “considerable” in the treeline and the alpine meaning avalanches can happen.

Steiman and Dunn are taking some of the basic precautions and are like so many new people now enjoying the backcountry that avalanche forecasters are trying to reach.

“The power and the speed with which snowmobiles can access terrain makes for additional potential risk for sledders,” said avalanche forecaster Jan Neuspiel of the Vancouver Island Avalanche Centre in Cumberland. “Also, the whole business of getting avalanche safety information into the sled community has been a real effort on the part of avalanche forecasters to increase awareness and safety.”

Dunn knows first hand how deadly an avalanche can be which is why he and Steiman go out prepared.

“Yeah, I lost an uncle in one,” said Dunn. “He got caught in an avalanche in southern Alberta.”

“We have a lot of safety equipment that we take with us,” added Steiman. “We’ve got beacons and probes and we’ve got radios that we can talk to each other and connect with the other guys.”

A beacon, a shovel and a probe could be the difference between life and death considering a person buried in an avalanche has just 18 minutes to get out.

“Organizing a group, getting them to respond in an organized fashion, being effective with a transceiver, honing in on a signal, probing until you hit a person and then digging them out of the snow, 18 minutes isn’t very long,” said Neuspiel.

The number of people heading into the backcountry is increasing every winter and backcountry skiing is the fasting growing segment of skiing. This is why avalanche experts encourage everyone to take at least a basic avalanche safety course.

“At Island Alpine Guides, we’ve seen a bigger, faster uptake on our avalanche training courses this winter than ever before so that’s got to be another indication of the growth in backcountry skiing,” said Neuspiel. “We’re standing here in December and we’re nearly sold out until March.”

A link to the island avalanche bulletin can be found here. 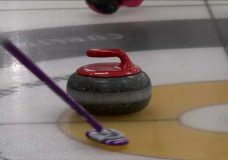