After postponing twice, the Beyond Van Gogh: Immersive Experience exhibit is slated to open up later this month, but many customers online are voicing their concerns following delays and difficulties receiving refunds.

The exhibit was first slated to open on Oct. 25 at 355 Catherine Street, offering ticketholders the “most immersive experience,” featuring the works of the Dutch painter Vincent Van Gogh. It’s a product of the parent company Beyond Exhibitions, which contracts out local companies to put on hundreds of shows around the world.

However, the company soon emailed customers that the exhibit would be postponed until Nov. 11 due to “unforeseen circumstances.” Customers were given until Oct. 23 to reschedule their tickets for free. 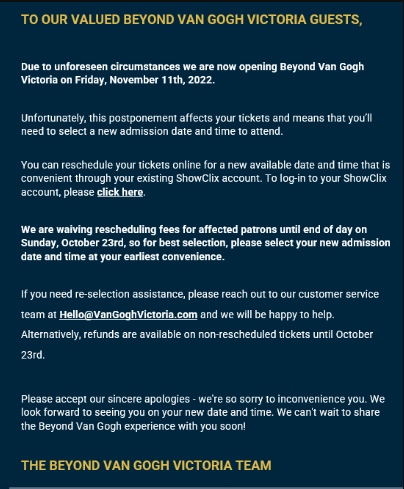 In closed Facebook groups, many were upset over the postponement. Some claimed that their requests for refunds and exchanges were not answered. Others claimed that they never received a notification the event was cancelled and only found out after arriving at an empty parking lot.

“I got a text message from my husband saying that they were in a empty gravel parking lot,” said Teresa Guader, who purchased nearly $300 in tickets.

Guader tells CHEK News that she bought four VIP passes for her friends and family to attend on Oct. 28, including her mother-in-law who was traveling from Lasqueti Island to experience the exhibit.

“My son and I had booked a hotel…I had to pay a water taxi to come off [Lasqueti Island] because there was no ferry on the day there was actually good weather,” said Kathy Rogers.

Guader was only given a notice of the cancellation from the exhibit the following day after she emailed the exhibit requesting a refund. The company informed her of the previous cancellation notice but she never received that email.

“I was upset and confused, like, they were asking me for another $8 to reschedule the tickets,” said Guader, who lives in Nanaimo.

After several emails, Guader was told she would not be given a refund since it was past the Oct. 23 deadline. She disputed the charge and was given the money back from her credit card company.

Several days following that dispute, she received another email from the company stating that had she not disputed the charge, she would have been eligible for a refund.

“For buying VIP tickets at almost $90 a pop, that wasn’t very good service at all,” said Guader.

In early November, the exhibit team informed ticketholders that its Nov. 11 show would be pushed back to Nov. 25, due to “continuing worldwide shipping issues.” 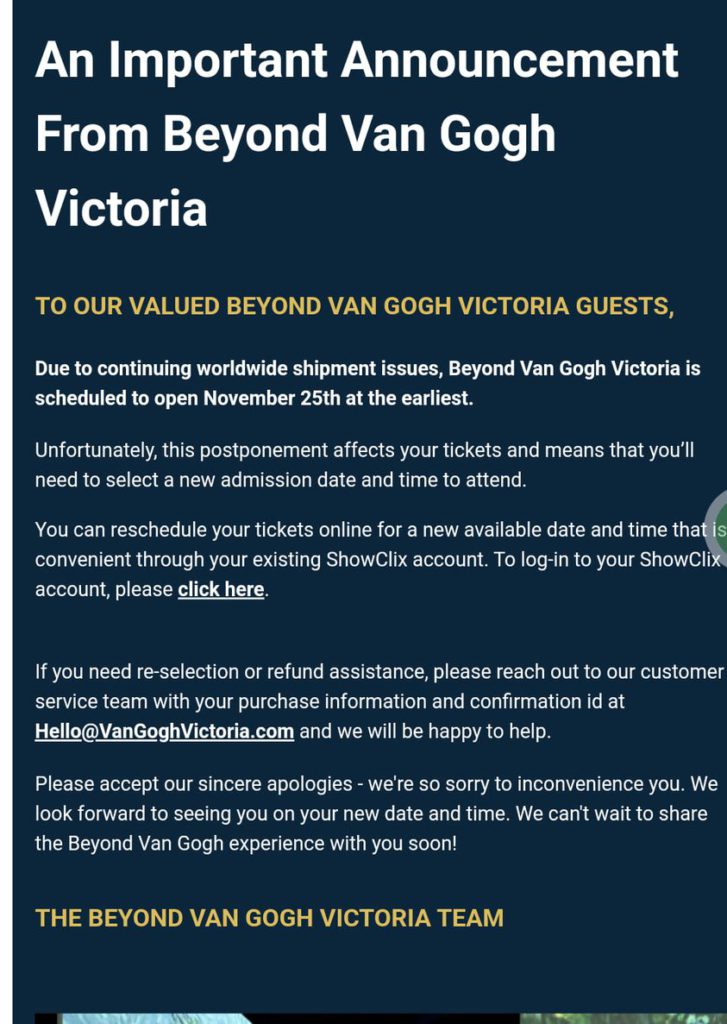 Bayview Place, which owns the venue the exhibit was supposed to be shown, told CHEK News over the phone that they were offering the land to Beyond Van Gogh for free. Adding that funds from the exhibit would go to a charity — which has not been announced. They add that they’re currently waiting for the exhibit to fill out paperwork to apply for a Temporary Use Permit from the City.

In an email to CHEK News, the City of Victoria says that to date, they have not received any permit applications from the exhibit.

CHEK News reached out to Beyond Exhibition and the contracted production company Paquin Entertainment Group, and the latter replied back saying the event is not yet ready to open to the public.

“There are administrative [and] permitting details that need one final round of review,” Justin Paquin, producer of Beyond Van Gogh, said in a statement, adding that his team is working with the City of Victoria and Bayview Place “to resolve all outstanding matters.”

“We are close to announcing a new opening date, but we want to be absolutely certain on a new date before we do,” he said.

This story has been updated with a response from Paquin Entertainment Group, who responded to CHEK News after deadline. 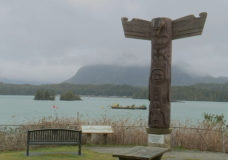 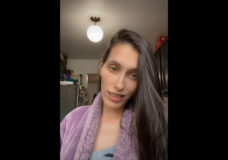