WATCH: The coastline is one of B.C.’s biggest treasures and researchers in Victoria say it could soon power our homes. Isabelle Raghem reports.

The B.C. coastline is home to some of the world’s most energetic and vibrant waves.

“Because of our natural geographic location, B.C. is the recipient of wave energy from anywhere in the pacific ocean. That makes us uniquely positioned to start to deploy technologies, test technologies and really look at the opportunities to provide clean renewable energy to the grid,” says Mechanical Engineer with the University of Victoria Bryson Robertson.

Information the province didn’t have until now, thanks to a UVic led project and report.

“Wave energy has been in popular media for about 100 years, it has significant challenges and hurdles to overcome but it’s developing quickly. When we look at what’s happening in Europe, in Australia, we’re starting to see these devices deployed at commercial scales,” says Robertson.

The report’s lead author says they have collected enough data about the coastal waves that the province can now start developing and testing wave energy converters.

“Every hour, every 50 metres up and down the coast, we can tell you what the wave conditions were. It really allows us to look at what would the production of wave energy be? What would it do for the grid? Would it be valuable? Is it at times we need it as British Columbians, or at times we don’t need it?”

Research shows in one year, a 20 metre wide section of wave off Vancouver Island could produce enough to power 52-homes.

“It’s not going to solve our energy problems,” says Robertson, “but it’s going to be a valuable contributor to our suite of renewable energy resources.”

Roberston says by the next decade, B.C. could be a world leader in wave energy if they dive in. 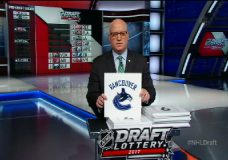