Up to 10 cm of snow falls in Nanaimo, with more on the way

Jason Michaud had been waiting weeks for snow.

But that wait is over.

Finally, the private snow clearing contractor has been run off his feet after a busy week.

“I’m exhausted,” said Jason Michaud of MJ Contracting. “I worked all night, all day,” he said.

George Hansford dusted off his seldom-used snowblower in Nanaimo to tackle the fast-falling snow that blanketed some areas, and left others closer to the water with barely a skiff.

“It stops at Jinglepot Road, and up here we get it all,” he said.

The storm dropped up to 10 centimetres of snow before switching over to rain by mid-afternoon.

For Michaud, it is providing some much-needed income during this, so far, mild winter to help pay for all the snow removal equipment he’s invested in.

“It gets me through the spring season financially,” said Michaud.

“All the money you put into these vehicles to get them insured, to get them outfitted for all the snow and ice removal you wanna get some of that money back hopefully,” he said. 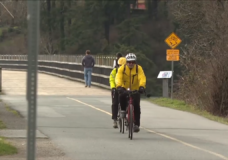 Galloping Goose and Lochside regional trails may be widened, separating cyclists and pedestrians 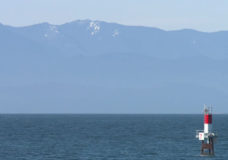