Police were called to the 7-Eleven on Jacklin Road, near Westshore Town Centre, at around 9 p.m. Friday, Oct. 14, for a report of an intoxicated group of youths between the ages of 13 and 18 waving knives around and threatening to stab two customers.

The two suspects allegedly punched and hit the two customers before leaving.

Officers attended the 7-Eleven, then were called to a stabbing at the Esso gas station across the street at 2953 Jacklin Rd.

One 30-year-old male victim was at the Esso gas station when he was hit with a baton and stabbed once in the upper body. He was taken to the hospital and his injuries are still being assessed.

The three victims are not believed to have a relation to the youth suspects.

Investigators were eventually able identify the group of youths Thursday night, including the male and female suspects believed to have committed the series of assaults.

“I don’t necessarily know if the youth understand the seriousness of the offences we are investigating,” Cpl. Nancy Saggar with West Shore RCMP told CHEK News in an interview.

West Shore RCMP did not say in a Thursday night news release whether charges had officially been recommended. 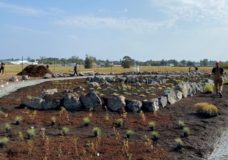