Two hawk chicks were being raised by Sidney eagles but only one remains, says expert

WATCH: Bird watchers have their eyes on Sidney but a new discovery has experts concerned for likelihood of hawk chick’s survival. Isabelle Raghem reports.

An eagle’s nest in Sidney is getting worldwide attention from bird watchers.

Eagle parents are raising a red-tailed hawk chick, right along side their three eaglets.

“We scientist[s] know of only about three documented cases where bald eagles have raised a red tail hawk chick to near fledgeling, meaning leaving the nest, so it’s a very unusual thing,” David Bird, Ph.D.  McGill Emeritus Professor of Wildlife, said.

Bird, who is also a board member of the Hancock Wildlife Foundation, believes the little hawk was snatched up from his nest by an eagle as prey but something changed along the way.

“There’s hormonal urges for these birds and the hormonal urge was to kill it and feed it to the eaglets. But another hormonal urge overtook that one and that is the parental drive to feed it because it was begging for food,” Bird said.

Since last week, the little hawk has become a local celebrity but experts say the chick’s survival is uncertain.

A picture taken last week shows two hawk chicks, rather than one.

“The mystery is whether there is still two chicks in the nest,” independent biologist Kerry Finley said.

He says the discovery of a second chick disrupts the current theory.

“It would require that that eagle made two rounds to bring back prey to the nests and deciding twice to not use it as food suggests maybe something else has occurred here,” Finley said.

“As long as there’s plenty of food coming in the nest for all baby birds, then everything will be just fine,” Bird said.

Experts expect the hawk will take its first flight and begin a life out of the nest in about a week and a half.

Bird-lovers have their fingers crossed that until then, the chick will continue to beat the odds. 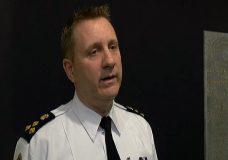