The RCMP released the identities of the two suspects in the Saanich RCMP BMO robbery.

Cpl. Alex Bérubé, spokesperson for the BC RCMP, says the suspects are 22-year old twins from Duncan, Mathew and Isaac Auchterlonie.

RCMP say the two suspects were not known to police before the incident.

“I’ve spoken with their family and they are cooperating with our investigation. They have asked for privacy at this time,” Bérubé said. “We’re looking into the suspects backgrounds and can confirm that neither had criminal records or were known to police.”

The motive is not yet determined. RCMP believe there may be others with more information about the brothers, and ask anyone with information to speak with police.

“We believe there could be people that may have more information about the brothers, their recent activities and travels and we need those people to come forward and speak to police,” Bérubé said.

Investigators are confirming the two suspects are connected to the suspect vehicle, the white 1992 Toyota Camry, four-door with two black racing stripes over the hood and roof. 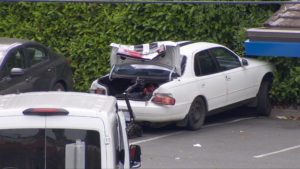 The possibility of additional suspects is being considered, but investigators have determined only the two suspects were in the bank.

“Investigation to date has determined that only two suspects were in the bank, however, we’re continuing to look into whether anyone else was involved or associated to the events on Tuesday,” Bérubé said. “Dozens of interviews have been conducted and hundreds of hours of surveillance video footage have been gathered all of which is being reviewed.”

The Independent Investigations Office of B.C. is continuing to investigate the actions of the officers.

“No change from a couple of days ago as far as information we can share with the public at this time,” the email said.

On June 28, two suspects were killed following a robbery at the BMO bank in Saanich on Shelbourne Street.

Six officers were injured in the shooting.

On June 30, Saanich Police Chief Dean Duthie told reporters three of the injured officers had been released from hospital, and three remained in hospital for treatment.

Vancouver Island Integrated Major Crime Unit (VIIMCU) is leading the investigation into the robbery and was working with the provincial coroner service to identify the suspects, both males, and notify next of kin.

At the June 30 news conference, police provided few details about the shooting.

On June 29, officers said a vehicle believed to belong to the suspects had been found with explosives inside, which had been safely disposed of.

Anyone with recent information or interactions with the two male suspects, who saw the Toyota Camry in the week prior to the incident or anything else that could be related are asked to contact VIIMCU at 250-380-6211. 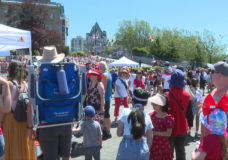 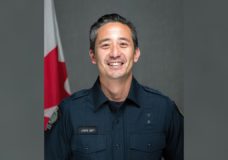 Central Saanich Police constable passes away after battle with cancer