Trudeau, Scheer among MPs to donate pay hike to charities during COVID-19 crisis

File Photo
Prime Minister Justin Trudeau and Conservative Leader Andrew Scheer are among the MPs who are promising to donate an automatic increase in their salaries to charity, as the COVID-19 pandemic ravages the economy and puts thousands of Canadians out of work.

Prime Minister Justin Trudeau and Conservative Leader Andrew Scheer are among the MPs who are promising to donate an automatic increase in their salaries to charity, as the COVID-19 pandemic ravages the economy and puts thousands of Canadians out of work.

The raise goes into effect today, as does the latest increase in the federal carbon tax.

Trudeau has been under pressure to cancel both.

However, he has ruled out scrapping the planned increase in the carbon tax and there’s nothing he can do about the salary hike without recalling Parliament, which has been adjourned until at least April 20 as part of the nation-wide bid to curb the spread of the deadly virus.

Under legislation passed in 2005 to de-politicize parliamentarians’ pay, salaries paid to MPs and senators increase automatically on April 1 each year, based on the average increase negotiated by major bargaining units in the private sector.

The prime minister, leader of the Opposition, the Speakers in both chambers and others with additional duties receive extra, legislated amounts beyond their base salaries.

In the aftermath of the 2008 economic meltdown, the previous Conservative government froze parliamentarians’ salaries for three years.

Asked Monday about a similar salary freeze now, Trudeau said: “I haven’t heard the Parliament of Canada having those discussions, but I’m sure they will reflect on it now that you’ve asked the question.”

A freeze would require legislation approved by Parliament, which has been adjourned since mid-March except for a brief day-long sitting last week to pass a bill freeing up billions in emergency aid to help Canadians weather the COVID-19 crisis.

It will likely stay adjourned long beyond the originally scheduled return date of April 20, although another emergency sitting could eventually be required, at which point MPs could also consider a pay freeze.

In the meantime, the salary hike is in effect. So, MPs from all parties are vowing to turn over their pay boost to charities and non-profit organizations working to cushion the impact of the national health emergency.

A spokeswoman for the prime minister said Trudeau will give his pay boost to non-profit organizations in his Montreal riding.

Similarly, a spokesperson for Scheer said the Regina-based Opposition leader intends to give his pay increase to “a local charity who is working hard to support Canadians affected by COVID-19.”

Denise Siele said that it’s up to the government to introduce legislation to freeze parliamentary salaries “should they so choose.”

NDP Leader Jagmeet Singh “makes donations to organizations and local causes throughout the year and, with the salary raise for MPs, he will increase his donations,” said his spokesperson, Melanie Richer, who noted that the same applies to New Democrat MPs.

Various Conservative MPs have issued statements over the past week promising to donate their imminent pay boosts to charities.

Given the current crisis, Alberta MP Blaine Calkins said the pay hike is “not only untimely but, frankly, it’s in poor taste.”

Conservatives have also been demanding that Trudeau cancel the planned increase in the federal carbon tax that kicks in today, raising the carbon price on fuel purchases to $30 per tonne from $20. That will mean drivers will pay roughly an extra two cents a litre at the gas pump.

The tax applies in Alberta, Saskatchewan, Manitoba, Ontario, Nunavut and Yukon, none of which have imposed their own price on carbon that meets the federal standard.

In a statement Tuesday, Edmonton Conservative MP Tim Uppal called on the Trudeau Liberals to scrap all planned tax increases during the pandemic, including the carbon tax.

“Too many Canadians are already worried about how they will pay their rent this month or put food on their tables. The last thing they need is a 50-per-cent increase to the Liberal carbon tax, which will only increase the cost of gas, groceries and home heating,” Uppal said.

However, Trudeau noted that the federal government is also paying rebates that are intended to give Canadians more money than they pay in the carbon tax.

“The price on pollution has been designed as to put more money in household pockets, more money in the pockets of the middle class while we do the things that are necessary to fight pollution and protect our planet,” he said Monday.

Trudeau said the need to combat climate change “remains even at a time of immediate crisis and pandemic.”

Michael Berstein, executive director of Clean Prosperity, suggested in a statement that the federal government should refine the rebate program during the crisis.

Among other things, he said families should receive the initially forecasted rebate amounts even if revenues from the tax decline. As well, he suggested that the rebates be sent as immediate direct payments to households, rather than as tax credits.

This report was originally posted by Joan Bryden with the Canadian Press on April 1, 2020. 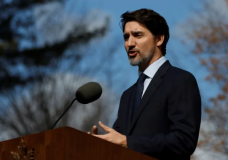