The Independent Investigations Office which is probing the RCMP shooting death of a 28-year-old First Nation man near Tofino says an Indigenous civilian monitor will be appointed to the case for the first time.

It was a request made by First Nation leaders on the west coast in the wake of Saturday night’s fatal shooting.

The appointee would be a non-police member of the community who is given access to the investigation and can offer comments and suggestions on it.

IIO Chief Civilian Director Ron MacDonald says it is now in the works.

“I hope it’s days or a week. It is something we want to get going on right away,” he said.

He says this will be the first time an Indigenous civilian monitor will be appointed to a case since the IIO’s inception, and he’s working on a more permanent community liaison role for the future.

In Tofino Monday, there was still shock about what happened.

“I thought it was a practical joke when I found out but it was real,” said Bert Brown Jr., who said he knew the victim.

READ MORE: Indigenous leaders demand answers after RCMP shoot, kill First Nations man near Tofino
It happened on the Opitsaht reserve, about two kilometres north of Tofino, when police said they responded to a call for assistance from a female.

Two officers from the Tofino RCMP detachment arrived by boat and a third officer responded from a neighbouring detachment, possibly Ahousaht, according to Tla-o-qui-aht First Nation Chief Moses Martin, who spoke with CHEK News on Monday.

It is unclear what unfolded next, but according to First Nations leaders, Jones was shot numerous times and another man was arrested.

“A de-escalation method, why couldn’t one be used in this? Why were three shots necessary? I don’t know if he died on the first, second or third shot,” said Nuu-chah-nulth Tribal Council President Judith Sayers.

The shooting brings back painful memories for Chief Martin, whose granddaughter Chantel Moore was shot and killed by a police officer in New Brunswick last June. Police there were responding to a welfare check call when she was also shot numerous times.

Martin says his First Nation generally has a good relationship with Tofino RCMP but is making an immediate change.

“If they’re going to come into our community they’ve got to have an escort from our community,” he said. “That would have helped de-escalate the situation.”

After the Chantel Moore killing, Indigenous leaders released several demands including that mandatory body cameras be worn by police, but they never heard back.

They say that would have helped clarify what happened in the current investigation, an investigation that Indigenous people won’t have much faith in.

“The use of deadly force by Canadian police forces against Indigenous peoples is an epidemic in this country. There have been numerous inquiries, studies, reports, and a First Nations Justice Strategy in BC created to address the need for justice reform. Despite this, our citizens continue to die as a result of police shootings. The lack of action on implementing these proposed solutions means more senseless shootings,” reads a statement from the Union of BC Indian Chiefs.

“The Nuu-chah-nulth Tribal Council, Pacheedaht First Nation and the FNLC are calling for a fully independent and transparent investigation into a police shooting that has resulted in the death of a 28-year-old member of the Tla-o-qui-aht First Nation…” https://t.co/GcgXvPY5c0 pic.twitter.com/NOpJfmRzrA

Meanwhile back in Tofino, Brown and others are still trying to comprehend what happened.

“It’s heartbreaking. It’s not something anybody wants to go through,” said Brown. 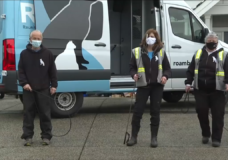