April 19, 2021 updated
CHEK
WatchRCMP are investigating after three teens were stabbed during an outdoor party of around 50 youths in the Comox Valley on Saturday night.

A teenage male was arrested after three teens were stabbed in the Comox Valley on Saturday night.

The incident happened at around 9:45 p.m. during a bush party of between 20 and 50 kids on Pritchard Road in an area known locally as the “sandpit,” according to the Comox Valley RCMP.

All three teens suffered serious but non-life-threatening injuries. Two victims were airlifted to Victoria while one teen was transported by ground to Nanaimo Regional General Hospital.

CHEK has learned that all four individuals — the three victims and the suspect — are males under the age of 18 and that at least two of the victims attend Isfeld Secondary.

Police officers on scene told CHEK News that a male teen arrested within hours of the incident in the Comox Valley and that the incident was not random.

Ryley Stevenson and Dante Lazzari, two teens who live in the area but did not attend the party, told CHEK News some of the victims involved are 15-16 years of age.

I was in shock … I didn’t expect anything to happen like that in this town, especially kids that we know, such young kids,” Stevenson said. “It’s crazy.”

Both and Lazzari heard from one of the victims that some of those who were stabbed were trying to diffuse some kind of altercation between the suspect and one of those involved.

Comox Valley RCMP say the stabbing was not random and that it appears many of the teens at the party were dropped off at the location by their parents, something they’re discouraging given the soaring number of COVID-19 cases on Vancouver Island.

In a media statement issued just before 5 p.m. on Sunday, Const. Monika Terragni, media relations officer with the Comox Valley RCMP, said the school district will be providing support to students.

“The school district has activated their critical incident response team which will be available to support students, families, and staff after this alarming incident,” Comox Valley RCMP Const. Monika Terragni, media relations officer, said in a media statement issued just before 5 p.m. on Sunday.

“It’s troubling, to say the least, that this has happened in our community. At this time, our thoughts and prayers are with the families involved and we do hope that everyone recovers from this fully,” said Arnott.

Police are continuing with their investigation.

.⁦@comoxvalleyrcmp⁩ is investigating after after three people were stabbed in #Comox last night. Waiting for more details but it happened in or near the sand pit on Pritchard Road involving numerous young people.⁦ ⁦@CHEK_News⁩ pic.twitter.com/Dul4Ahv8KC 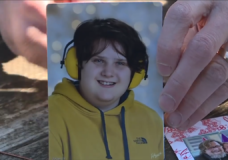