Thousands of farm animals have died in an “agriculture disaster” in British Columbia set off by floods that swamped an area of the province known for its prime farming industry.

Agriculture Minister Lana Popham said many farmers attempted to move their animals by boat as their property flooded but were forced to abandon them, “as the roads were disappearing beneath them.”

Even the animals that were successfully moved are in poor health and some may need to be euthanized, she said.

“The animals that are getting moved through those water flows have been able to make it to a safe spot, but to tell you the truth, they’re not in good shape when they get there,” she said Wednesday during the same news conference where the B.C. government declared a state of emergency.

She said hundreds of farms have been affected by flooding, many of them in the Fraser Valley, about 100 kilometres east of Vancouver.

“And we have thousands of animals that have perished. We have many, many more that are in difficult situations and we’re seeing an animal welfare issue develop,” Popham said.

There will have to be euthanizations, while there are also animals that have survived that will be in critical need of care, the minister said.

The government is working to get safe access for veterinarians to those farms as soon as possible.

The animals that survived will be in critical need of food for the next 24 hours as flooding wiped out access to feed, said Popham.

Dozens of the farms under evacuation orders in the Fraser Valley region are poultry farms, says the national group that speaks for chicken farmers.

Lisa Bishop-Spencer, the communications director with Chicken Farmers of Canada, said of the 310 chicken farms in B.C., 61 farms are being evacuated, 22 of which are broiler farms, where chickens are raised for their meat.

“Everyone’s still trying to make sure that themselves and their families are safe and taking as best care of their birds as possible, but we don’t have any specific information on losses yet,” she said.

It’s fair to expect some losses as farmers were faced with challenging conditions trying to move animals to safety, she said.

Dairy and chicken farms cover the Sumas Prairie area of Abbotsford, the same location that residents in 1,000 properties were told to evacuate on Tuesday.

Farmers spent hours Tuesday working to transport their animals to safety, in some cases relying on boats and other watercraft.

B.C. is the third-largest chicken-producing province in the country, said Bishop-Spencer, but their organization is working to ensure there are no supply issues once help has been given to all farmers and animals.

“We’re working with federal and provincial partners just to deploy support and assistance wherever,” she said.

The mayor of Abbotsford said he does not know how many farm animals may have been lost as floodwaters washed over the city Tuesday.

Sumas Prairie is part of Abbotsford, which was deluged by water over a 72-hour period starting Saturday.

Mayor Henry Braun said he watched farmers trudge through water that was 1.5 metres deep to get the livestock out.

“We have no numbers. There’s a lot of birds out there too. I saw barns that looked like they were half full of water. I can’t imagine that there are any birds left alive, but we don’t have those numbers.”

Braun said Tuesday he knew the farmers wanted to protect their animals.

“Many would give their lives for their animals,” Braun said.

The situation grew more frantic Tuesday night when it appeared a crucial water pump station would be overwhelmed.

Braun urged those farmers who had ignored the evacuation order to leave their animals and get out.

By Wednesday, the pump station had been surrounded by sandbags and Braun said he felt better about the situation.

Holger Schwichtenberg, chair of the board for the BC Dairy Association, said 25 to 30 cows were being transported to his own farm in Agassiz on Tuesday from another farm in the Fraser Valley.

“This is an example of an industry coming together when things really get ugly,” Schwichtenberg said. “We’re doing the best that we can with the situation that we’ve been handed and it’s a tough one.”

The B.C. Milk Marketing Board has advised dairy farmers in areas like Abbotsford, Chilliwack and the B.C. Interior to dump any milk into manure piles because mudslides and road washouts have made it impossible to transport.

Many B.C. dairy producers have no road access at all to their farms right now. In other cases where milk can be picked up from the farm, there is nowhere for it to go.

Schwichtenberg said this week’s flooding has put a strain on the industry, which is still reeling from a disastrous summer.

“We had a long, hot summer, we had a very poor growing season unless you had irrigation, the ongoing effects of COVID, and now we have this situation,” he said.

“It’s testing the resilience of dairy farmers, that’s for sure.” 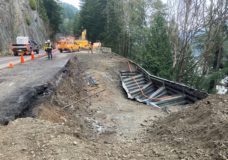 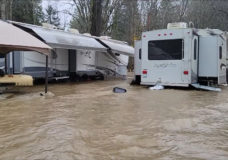