Wreaths lined the foot of the Victoria Cenotaph Thursday morning as thousands paid their respects to those who fought and died in service, and those who still serve.

The annual Remembrance Day Ceremony included the playing of ‘The Last Post’, two minutes of silence, followed by cannon fire.

This was the first ceremony held after the province finished upgrades at the B.C. Legislature in order to accommodate larger gatherings and boost security.

Last year people were encouraged to stay home and participate online due to the COVID-19 pandemic.

But thousands attended today, flooding the corner of Belleville and Douglas streets and taking over the front lawn of the B.C. Legislature.

“There’s a lot more people here than we expected but everybody was well behaved, everybody was wearing masks. It’s a day like this that makes you proud to be a Canadian,” said Stanfield.

Making it a memorable day for those participating in the ceremony for the very first time.

“This was my first one, it was an honour and I’m glad I did it,” said Stephen James Rubio, a Third Class Sailor with the Royal Canadian Navy.

This year also marking the 100th year since Canada adopted the poppy as a symbol of remembrance.

The crowd hidden under umbrellas and holding loved ones close, stood in silence while prayers were read out and hymns were sung.

“It’s really a wonderful opportunity to think about those who have served our country, who have sacrificed so much for our country. Who have given so much, really for the privilege of serving us, for keeping us safe and protecting the values we care about as Canadians,” said Lieutenant Governor, Janet Austin.

Following the ceremony, people made their way to the cenotaph so they too could lay a poppy and reflect on those who made the ultimate sacrifice. 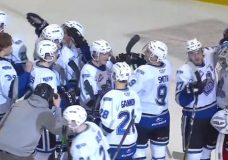 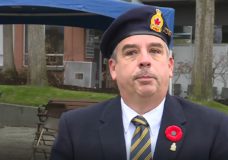