This Week in History: Important Fossil Sites in British Columbia

There are a number of important fossil sites in British Columbia.

“They span all the way from 550 million years old to about 10 thousand years old, so we’ve got quite a span over geological time,” says Jaclyn Richmond, RBCM Paleontology Collections Manager.

“One is the Burgess Shale site, about five hundred million years old, located in Yoho National Park. The animals preserved in the Burgess Shale lived in the ocean and were buried in soft mud which turned to rock much later, allowing fine details including soft parts, and not just their hard shells like most other fossils, to be preserved.”

Another important site is Wapiti Lake, just north of Jasper in the BC Rockies, which houses fossil coelacanths.

“They are bony fish,” says Richmond, “that are actually more closely related to tetrapods, or four-legged animals, than they are to ray-fan fish. In terms of evolution, this is really important because you can see the transition between marine animals to walking animals, or terrestrial animals.

“They were thought to have been extinct during the late Cretaceous period, about 67 million years ago, about the time dinosaurs went extinct, but then they were rediscovered. Two extant species, or living species. One was found in a fish market in Africa, and then one was found in Indonesia as well. So we have two living species – they are known as fossil fish, which is quite cool.”

A third important site is on the Saanich Peninsula, where mammoths roamed what is now Island View Beach.

“Because B.C. is so diverse, paleontologists from around the world can gain knowledge about tons of different specimens, different time periods, and because of that, B.C. is quite attractive to scientific research. Here at the Royal BC Museum, we make those specimens accessible for scientists. We also loan out our fossils to other institutions, and it’s really important to global paleontology as a whole.” 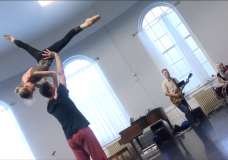 SoundCHEK: Ballet Victoria will rock you