Sunday marks the 40th anniversary of the Marathon of Hope, when Terry Fox started his journey across Canada for cancer research.

But this year, COVID-19 is the disease in the limelight.

Terry’s cousin Darren Wark put a mask, made out of an inspiring t-shirt, on the statue of Terry Fox at zero mile marker in Victoria.

“To be able to say we stand behind Terry today, and everything he stood for 40 years ago and the changes we have maybe in cancer research and the results-oriented around cancer research . . . everyone just deserves a pat on the back,” said Wark.

As events are cancelled across the country, Terry Fox Foundation volunteers don’t know if the annual Terry Fox Run will proceed in September, but said he will be celebrated in one way or another.

“Regardless of whats going on with COVID- 19 we will find a way to do something. We’ll find a way,” promised Ward.

The difficulty for Canadians this year is staying apart.

But Rob Reid, board chair of the Terry Fox Centre, has created a new challenge to honour Terry Fox amid an era of physical and social distancing.

“He ran 143 marathons in 143 days, and I think it’s a great opportunity for us to social distance by doing that for 143 days,” said Reid.

The challenge is simple. For 143 days, just like Terry, you will run, bike or walk every day. For every one of those days, put a loonie away to be donated to the Terry Fox Foundation in September, when the Marathon of Hope was cut short.

Terry’s cousin is joining in himself.

“I’m going to cycle to work every day,” said Wark. “I’m going to get out there with my wife, my kids and my dog and we’re going to so something every day for 143 days.”

Although no one knows what the next 143 days will hold, in times like these, the Canadian hero’s legacy will live on. 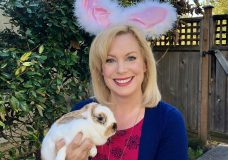