‘It was a spectacle:’ Langford man who towed vehicle blocking his driveway becomes internet sensation

WATCH: A Langford man has found himself an internet hero after taking matters into his own hands when someone parked in front of his driveway. April Lawrence reports.

A Facebook video that’s been viewed more than 20,000 times since Friday shows a Langford man hooking a car up to tow ropes and hauling it down the street while the front tires shriek in protest.

The car had been parked in front of a driveway in the new McCormick Meadows subdivision when the homeowner returned from shopping and couldn’t access his house.

Adam Peyton, who is working on the house across the street, saw what was happening and pulled out his phone.

“I got on my phone and started recording because I thought it was hilarious and I wanted to share with a couple friends on Facebook,” Peyton said.

That couple of friends turned into more than 20,000 views and Colin Stann has suddenly found himself an internet hero.

“I didn’t expect it but it’s fun it’s nice to know guys are supportive,” he said.

Stann says he couldn’t get around the car to get into his driveway so when some workers across the street offered tow ropes, he jumped on the opportunity.

The gentle giant, who works as a corrections officer, says he actually went easy on the car and didn’t tow it far.

“I don’t think there was any damage I didn’t hear anything break when I was towing him away,” he joked.

Parking has been a problem at the busy construction zone and Stann’s actions have made him a popular guy among those working on site.

He thinks the video is popular online because people are feeling like they have no control these days.

“I think people just want to be able to grab on and take control a little bit,” he said. “Maybe that’s what I gave them, a little bit of control.”

He says he hasn’t heard from the car’s owner and, after taking matters into his own hands like he did, he doubts he ever will.

West Shore RCMP say what Colin Stann did isn’t necessarily a criminal offence but he could be liable for any damage done to the vehicle and they aren’t recommending anyone take similar actions.

They say blocking somebody’s driveway is a Motor Vehicle Act offence and a bylaw violation in Langford but if you need a vehicle removed, call bylaw or police. 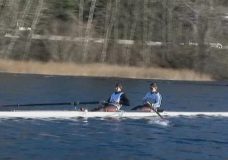 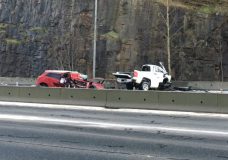