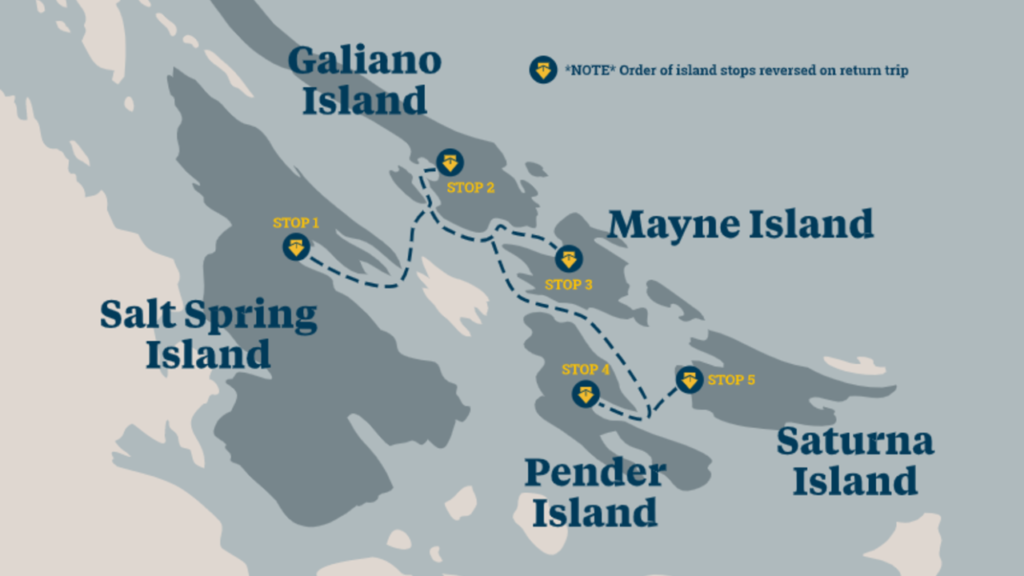 AquaLink
WatchAquaLink is expected to begin operating scheduled sailings between Salt Spring Island and Saturna Island — stopping at Galiano, Mayne and Pender islands along the way — starting in September.

A pilot project water taxi service connecting all five of the Southern Gulf Islands is about to set sail.

AquaLink is expected to begin operating scheduled sailings between Salt Spring Island and Saturna Island — stopping at Galiano, Mayne and Pender islands along the way — starting in September.

Operated by Gulf Islands Water Taxi, AquaLink will run every Saturday and Sunday throughout the month of September, with one scheduled sailing in the morning and one scheduled sailing in the afternoon or evening. Ticket prices vary depending on distance but range from $15.75 to $21 per adult one way and all sailings between Salt Spring Island and Saturna Island will include stops at the other three Southern Gulf Islands as well.

“People will be able to take a morning water taxi over the other islands and return that evening, or they can spend the Saturday night and return on Sunday evening to make a little bit more of a weekend out of it as well,” Chris Hall, operations director for Aqualink, told CHEK News on July 24.

AquaLink, which was funded by the Southern Gulf Islands Tourism Partnership (SGITP), is only expected to be in operation for the month of Setempber as part of a pilot project. Hall said the project’s goal is to determine whether there is enough demand and economic benefit to make the service more permanent in the future.

“Definitely the goal is to make it more of a permanent fixture,” he said. “I probably wouldn’t run during the winter months, just due to weather and the demand that we would have during the winter, but we’d certainly love to see this operational spring through the fall eventually.”

Travelling between all five Southern Gulf Islands hasn’t always been easy, said Hall and the hope is that a service linking the five islands will not only help locals commute between them but that it will also increase tourism and improve each of their local economies.

“I think it’s always been an issue to connect the Gulf Islands,” said Hall, later adding. “We’re hoping this service gives people some options to travel to the islands. Even myself that’s lived on Pender for six years now, I haven’t really spent a lot of time exploring the other islands because it’s so hard to get to for a day trip.”

“For me on Pender Island, using the BC Ferries system, if I wanted to go to Salt Spring for the day, I either have to turn around at half an hour after I got there or I would be forced to spend the night there due to the scheduling that’s in place. So this will kind of give people some extra options to explore the islands further.”

As a passenger-only service, Hall said AquaLink isn’t competing with BC Ferries, but merely offering service that complements what the province’s largest ferry company currently provides to the Southern Gulf Islands.

“The goal isn’t to compete with BC Ferries but to add an additional service to what’s offered,” he said, adding. “Being a passenger-only vessel, it’s a lot smaller and it’ll give people kind of the experience of being on a motorboat, which I think will be a great experience.”

AquaLink will be operated by Gulf Islands Water Taxi, which operates a range of different vessels.

“[They are an] established business that’s been operating in the Gulf Islands for 40 years already,” said Hall. “They have a number of different vessels from a 10 passenger boat all the way up to a 45 passenger vessel. So it gives us some sort of flexibility.”

Whether AquaLink is operational beyond September will depend not only on the results of the pilot project but also on funding.

“It’s not cheap to run water taxis and this will definitely require some extra funding and subsidizing,” said Hall. “We’re really hoping the [pilot project] shows that there’s a demand.”

For schedules, pricing and more information on AquaLink visit www.aqualink.ca 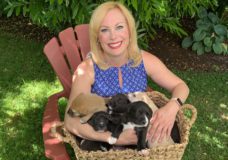 Pet CHEK: Rosie's puppies will be ready for adoption soon! 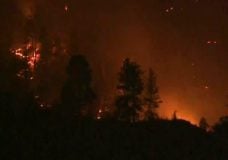