Posted: Jan. 24, 2020 4:55PM | Last Updated: Jan. 24, 2020 6:00PM
CHEK
WatchEsquimalt crews have been trying to clean up an oil spill in Gorge Creek, a migratory bird sanctuary, but heavy rain and high tides have made it a challenge so they've called in reinforcements. April Lawrence reports.

The Township of Esquimalt said Friday afternoon that the source of the oil spill in Gorge Creek was a home heating tank.

According to officials, there was one source of hydrocarbons: a home heating oil tank that leaked oil into both the ground and the stormwater system. The township said that the tank has been disconnected from the system to prevent further spills and staff are “in the process of taking the next steps with the homeowner.”

An oil response vessel arrived Friday to try to handle try to get a handle on the significant oil spill in Gorge Creek.

“This is probably one of the worst ones I’ve seen in my time here,” said Jeff Miller, Director of Engineering for the Township of Esquimalt.

The Gorge Creek spill was first spotted last Saturday and Esquimalt says crews have done their best to try to contain it. But in the face of challenging conditions, the decision was made Thursday to call a contractor in.

“Our crews responded very quickly, we were catching a fair amount of it, but it’s the fact it’s still coming through the system is starting to overwhelm our efforts,” said Miller.

“Just because of the extent we see of it trying to get into the Gorge, and the rainfalls we’ve been having, and the extremely high tides, we’ve also decided to bring in an external contractor who’s more of an expert in these matters,” he said.

Because it’s a migratory bird sanctuary, federal wildlife officers were on scene Friday as were provincial and Capital Regional District officials.

Despite the strong smell and oily sheen the numerous ducks in the water don’t seem to notice and wildlife experts say that’s a problem.

“They’re swimming in it, they’re feeding in it, they’re in these grasses so all the things I just mentioned, starvation, hypothermia, they’re being covered in a sheen of hydrocarbons,” said Dorothy Chambers, a Gorge Watershed advocate.

“This time of year is when we have more ducks in the Victoria area than any other time of year, so an oil spill at this time is particularly dangerous,” said Ann Nightingale with the Rocky Point Bird Observatory.

And ducks aren’t the only wildlife in the area.

“So right behind where the boat is right now is a reef for red-listed Olympia oysters… it will impact them, hydrocarbons impact everything,” said Chambers.

Staff say they haven’t noticed any harm to wildlife so far, so the focus right now is to find the source of the oil.

“We’re basically following a trail of hydrocarbons that are higher than usual,” said Miller.

They believe they’ve narrowed it down to a home heating oil tank. And they’re urging people to regularly check their tanks for leaks.

“We have some good indications, that’s what it might be, but until we complete our investigation I can’t say with any degree of certainty,” said Miller.

Extra booms were placed out further into the Gorge Waterway Friday and the wildlife will continue to be monitored for impacts while Esquimalt crews continue to narrow down the exact source of the leak and put a stop to it.

There are several watershed outflows in Esquimalt that empty into shorelines around the Township. Residents and businesses are reminded to avoid allowing chemicals and other materials into catch basins and drains.

Residents are asked to respect the fencing around the creek to avoid further disruption. Anyone spotting a spill, or notice the risk of one occurring, are asked to report it immediately by calling the province’s spill line at 1-800-663-3456. 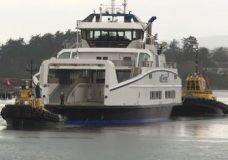