One glance at grocery store shelves across Vancouver Island, tells part of the story.

“Yogurt, as people have seen everywhere, which mainly comes from east of the Rockies which usually comes by train and truck is being hit hard everywhere,” said Craig Cavin, operations manager of South Island’s Country Grocers.

Supply lines across B.C. are still disrupted after an atmospheric river washed away railway lines and highways three weeks ago. Yogurt is just one of some products stuck in transit or delayed because of the storms.

Today the province is giving an indication, however, that some of our transportation corridors have been repaired.

“Between Highway 3 our lone commercial truck route to the Interior, and the detours that are available now through Washington State, we’ve now seen over 10,000 trucks move products around our province. CP Rail has been moving freight. CN is working toward a mainline reopening between Kamloops and Vancouver expected this weekend. Airlines have continued to increase their cargo flights. And together this makes a tremendous difference,” said Rob Fleming, B.C.’s transport minister.

Some experts even expect our supply lines will balance out by the start of next week.

“In three or four days it’ll come out fine,” said David Gillen, the director of UBC’s Centre for Transportation Studies.

While food products will start arriving from across Canada, many B.C. food producers in Abbotsford and the Sumas Prarie are facing incredible damages and losses.

“It’s going to take a lot of time because people really lost in this kind of calamity a lot of animals and production capabilities,” said Adel Guitouni, a UVIC assistant professor who researches global supply chain.

The Sumas Prairie is a milk, eggs, and poultry production hotbed. With those farms being down, lower mainland and Vancouver Island distributors will, or already have begun to source those products now from the United States or the rest of Canada instead, until the farms on the Sumas Prarie get repaired and up and running.

Then, there’s the wider context to consider.

“I believe the crisis of the global supply chain will go into 2022 and even 2023,” said Guitouni.

Grain and other commodities from the prairies set to export to Asia have been unable to make it to the port of Vancouver. Compounding problems for the shipping industry which has already been plagued by increased demand and delays due to COVID-19.

Here in B.C though, we’re well-stocked to carry us through December and the holiday season.

“Turkeys are going to be available, frozen and fresh. Yogurt should be back online too,” said Calvin. 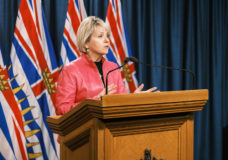 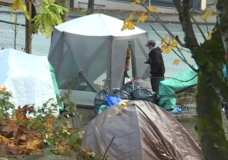