A snowfall warning is in effect for parts of Vancouver Island with up to 15 centimetres of snow predicted near Lake Cowichan.

In Greater Victoria, rain is expected at sea level but five to 10 centimetres of snow is expected at higher elevations, including the Malahat, throughout the day. Another five centimetres may fall in those same areas Tuesday evening. 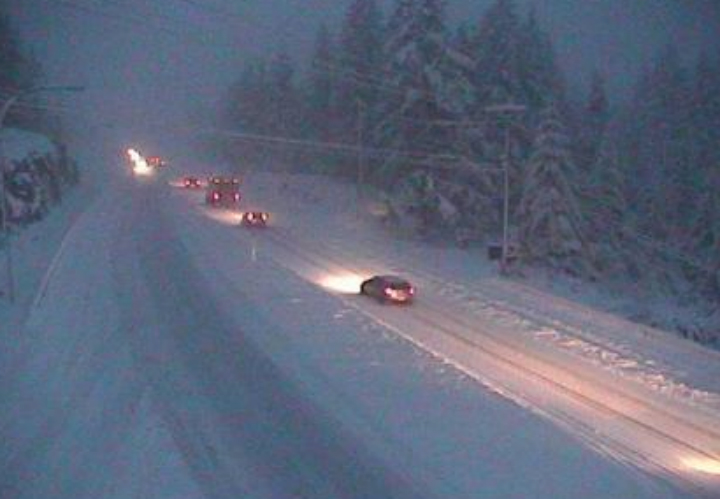 On East Vancouver Island, from Duncan to Nanaimo and Nanoose Bay to Fanny Bay, rain is expected near the coast but higher elevations could see up to 10 centimetres of snow during the day. Another two to five centimetres is expected in the evening.

Inland Vancouver Island may see even more snow throughout the day. Environment Canada is predicting 10 to 15 centimetres over the southern sections of the region, especially near Lake Cowichan. Another five centimetres is in the forecast for Tuesday evening. 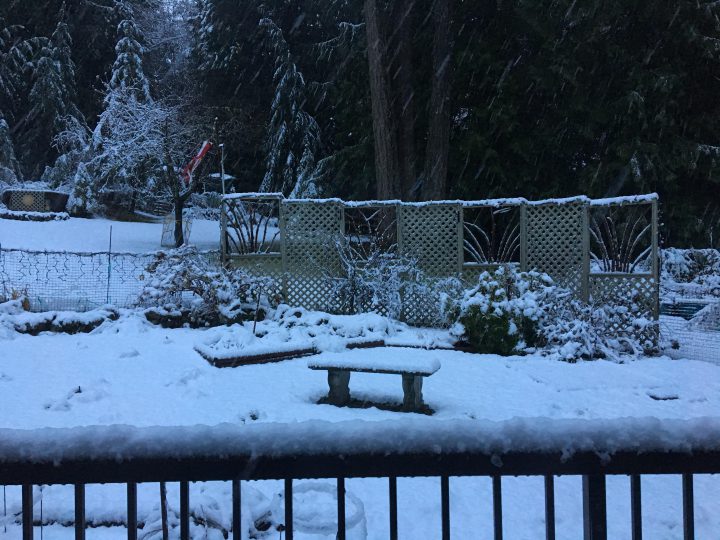 The weather agency is warning drivers that rapidly accumulating snow could make travel difficult in some locations.

All three areas, as well as the Southern Gulf Islands, continue to be under a special weather statement as intensifying low-pressure system tracks across northern Washington State Tuesday, close to the B.C. border.

Precipitation is expected to ease by Tuesday night and much of the snow that falls on Tuesday may melt by Wednesday.

Snow is also likely Thursday as an Arctic front drops down from the B.C. Interior. The Arctic front will usher in colder air for the rest of the week.

At 7:40 a.m., Drive BC reported that Highway 14 is closed in both directions at Kangaroo Road in Metchosin due to fallen hydro lines. The highway reopened at around 11 a.m.

#BCHwy14 CLOSED in both direction at Kangaroo Road in #MetchosinBC because Hydro lines are down. No detour available. Estimated time of opening is unknown. Next update 9:00 AM.https://t.co/GhZsIaTwWV

OPEN – #BCHwy14 is now open in both direction at Kangaroo Road in #MetchosinBC because Hydro lines are down. https://t.co/GhZsIaTwWV

WATCH: Cars hit the ditch during a winter storm on Vancouver Island on Dec. 19.

Driving on the Port Alberni summit

Driving on the Port Alberni summit 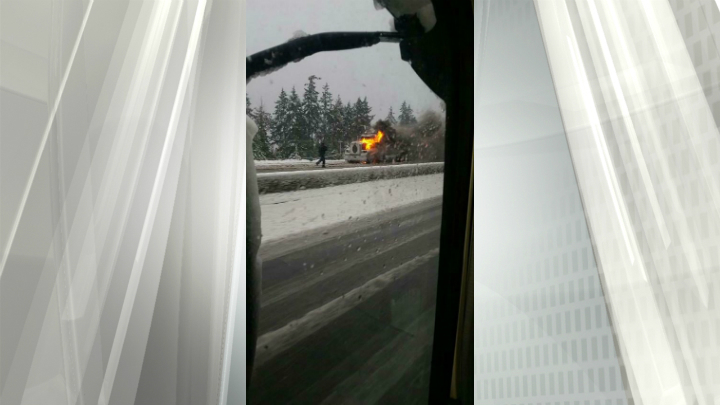 A truck on fire on Highway 19 blocks northbound traffic outside of Lantzville around 10:30 a.m. Credit: Cristina Evanusich

BC Ferries says the MV Klitsa on the Brentwood Bay-Mill Bay route is 20 minutes behind schedule due to snow removal at Brentwood Bay and Mill Bay.

Harbour Air flights in Victoria and Nanaimo have been cancelled due to weather. There are also delays and cancellations at the Victoria International Airport due to the storm in Vancouver.

Victoria Airport has an outage and is operating under emergency power. The cause is unknown and operations are slightly delayed.

#YYJ airport is currently operating on emergency power. Cause of regular power outage is unknown. Only slight delays to operations at this time. Please check the status of your flight w/ your airline or our website and allow yourself extra time to get to airport. #yyjops

BC Hydro says snow and freezing rain has impacted customers across Vancouver Island. All available resources are working to restore power as soon as possible. However, difficult conditions and extensive damage means that some customers may be dealing with longer outage times. There are more than 9,000 BC Hydro customers without power in Courtenay, North Cowichan, Ladysmith, Nanaimo, Parksville and Qualicum Beach. There are also more than 12,500 customers without power in:

Crews will be heading to an outage in Cowichan Bay affecting 1300 customers. We'll share updates at: https://t.co/h9UFZ1wxt0 #VancouverIsland pic.twitter.com/z4Bq5mNhxe

Heavy snow has caused a number of large outages on #VancouverIsland this morning & crews will be responding. Remember – down, danger, dial. If you see a fallen power line, it can be dangerous. Stay back 10 metres and dial 911. https://t.co/kxFKHbL1iD pic.twitter.com/JLh30MbsAa

Crews will be responding to an outage affecting 2100 in the #Parksville area. Once crews arrive, we'll have the latest updates here: https://t.co/BHpzteHQR5 pic.twitter.com/a6HGfcJq6E

Some large outages in the #LakeCowichan #Youbou area this morning due to heavy snows; we'll have further info once crews arrive on site and investigate. Please check back for updates: https://t.co/pZ1x4x6Tte pic.twitter.com/l88vk71L8H

A snow storm has caused an outage to 1400 customers in the #LakeCowichan area this morning. We'll have updates once crews arrive. Latest info: https://t.co/NFLT6IgdNQ pic.twitter.com/ZLPAAx3FMb

Area of power outage in Lanztville with 2,821 BC Hydro customers without power.

An outage in #Nanaimo is affecting 1500 customers this morning. Once crews arrive on scene to investigate we'll have the latest info here: https://t.co/JrUsKZPDEY pic.twitter.com/WRvDHbcx87

1750 customers in the #Colwood #Langford & #Metchosin area are without power following a snow storm. Crews will be sharing updated information here: https://t.co/MQZkD6A5rU pic.twitter.com/zp43mHdGTS

Crews will be responding to an outage affecting 3000 customers in the #Colwood #Langford #Metchosin & #Sooke area. Updates here: https://t.co/0E81tdFfoF pic.twitter.com/kp98qRlyIi

An outage is affecting 1300 customers in the #DuncanBC area; we’ll have updates after crews arrive on site: https://t.co/Vjvzivw5ck pic.twitter.com/vDcndawkYk

Crews will be responding to an outage near #DuncanBC that’s affecting 750 customers this morning. We’ll have the latest info here once crews arrive: https://t.co/DGDxf8YGar pic.twitter.com/Dqkh4BobdQ

Crews will be responding to an outage affecting 1400 near #Sooke #Metchosin; expect to arrive around 7:30. Updates: https://t.co/f1YHWg1Wb2 pic.twitter.com/gpWKeHcdqF

The latest power outages can be found on the BC Hydro website.

Sooke School District #62 announced just before 8 a.m. that classes are cancelled at its schools but all schools will remain staffed and open.

All #Sd62 schools closed for instruction today, but will remain staffed and open. Notification about tomorrow will be made by 6am.Snow day!

Nanaimo-Ladysmith School District #68 is open and buses are running. Pleasant Valley Elementary is without power and parents are encouraged to pick up their child, if it is an option. Tuesday’s Christmas concert has been postponed. Randerson Ridge Elementary and Dover Bay Secondary do not have power. École North Oyster is also without power or water and parents encouraged to pick up their child.

The Cowichan Valley School District will be sending students home early due to worsening weather conditions. All schools will remain open until every single child has been picked up safely or is on a bus.

Qualicum School District No. 69 says Kwalikum Secondary School, Arrowview Elementary, Errington Elementary, L’Ecole Oceanside Elementary and Nanoose Bay Elementary are being closed due to power outages. Parents have been contacted and buses sent to the schools. The entire district is on a two-and-half-hour early dismissal. Staff will remain at the schools until all students are dismissed.

Send your pictures and videos of the B.C. storm on Vancouver Island to [email protected] 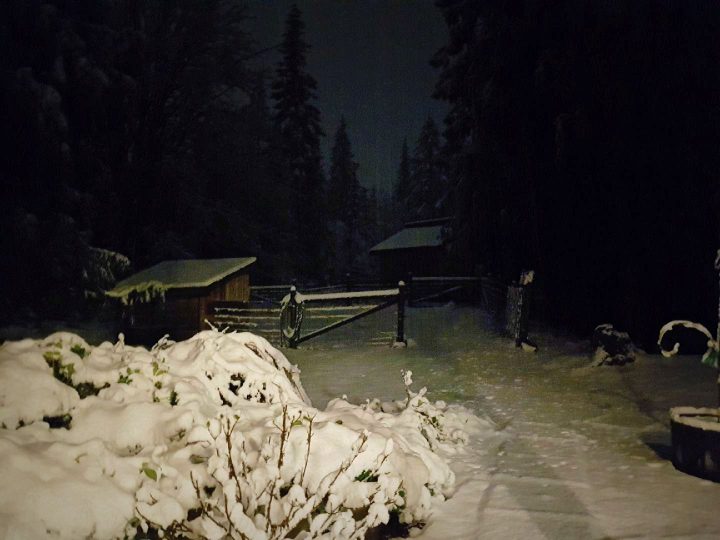 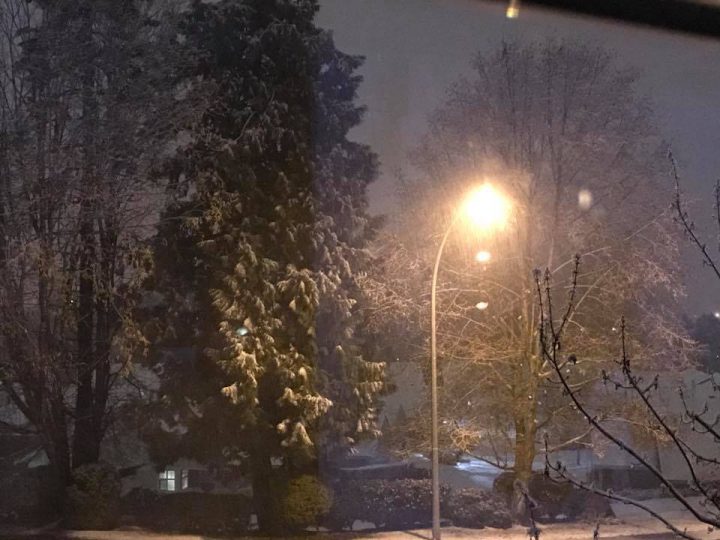 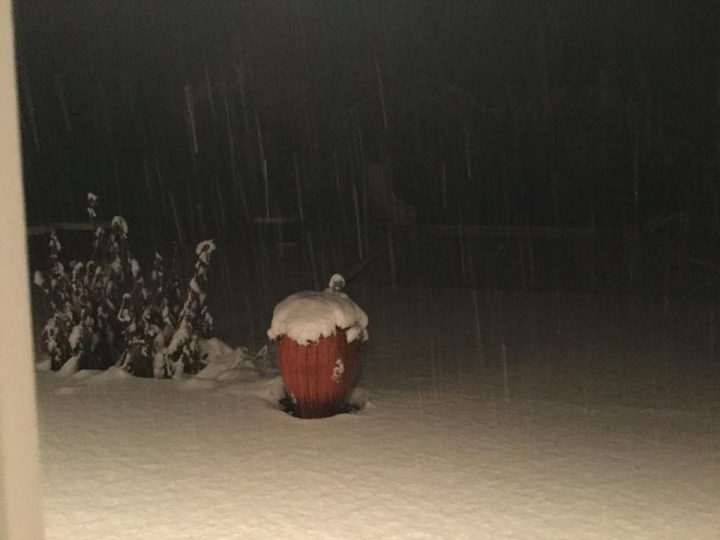 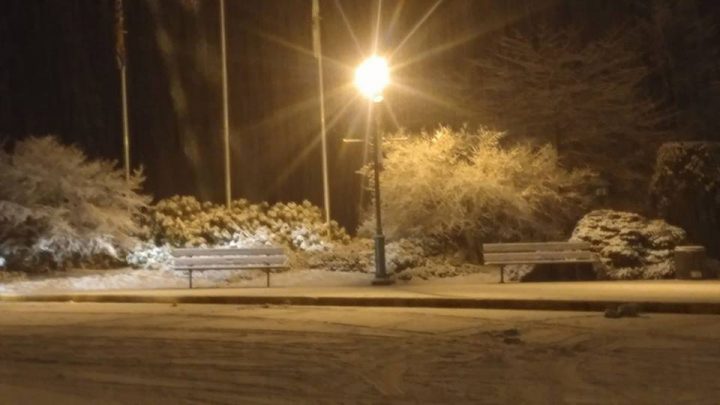 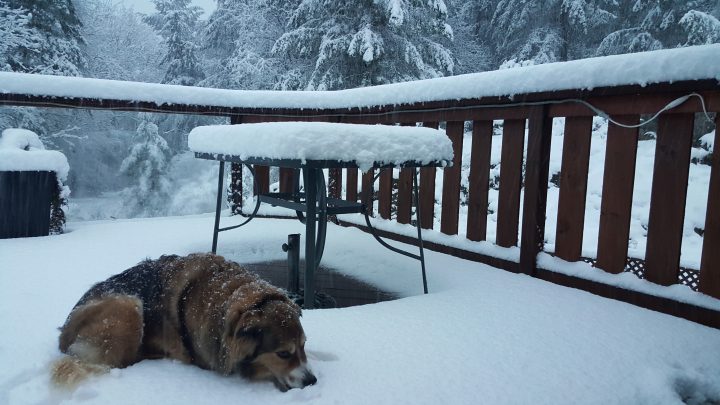 Michelle Cooper sent CHEK this picture of her dog in the snow in the Highlands. 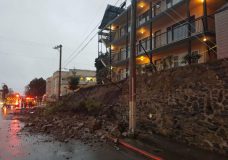