It’s a sunny, summer day at Departure Bay but the visibility is far from clear. You can’t see the mountains on the mainland and even Newcastle Island across the bay is obscured. The smoke, coming from the fires in B.C.’s Interior, is persisting, and it’s fluctuating in severity, depending on how the winds blow.

“We were here yesterday, and the big freighter out there, you could read the number on it,” said Nanaimo resident Wally Barner. “Today you can’t read it at all so it’s definitely a lot smokier than it was.”

Many are enjoying the outdoors despite the smoke though some are feeling its effects.

“It definitely does affect you and my granddaughter her eyes were stinging and we had to give her an antihistamine,” said Nanaimo resident Karen Burgh.

The Coastal Fire Centre said the weather pattern causing the smoke to travel west is proving to be very unusual.

“Usually when we get these outflow conditions where the air from the interior of the province moves to the coast they usually last for a couple of days,” said Coastal Fire Information Officer Donna MacPherson. “And then they turn around and it goes back to the normal pattern.”

But that shift has yet to happen since the air advisories on the South Coast six days ago.

“My weather forecaster is saying this is probably a 36-year event so far and it could go even further,” said MacPherson. “We’re not seeing a real break in this pattern until probably the middle of next week.”

BC’s air quality is updated hourly. Nanaimo, Duncan and the Comox Valley were as bad as 7 on the index out of 10 overnight and Sunday morning, which means there’s a high health risk. The region’s air improved to 4’s and 3’s by this afternoon. A four means there’s a moderate health risk.

“If we’re getting it just a 7 I can’t imagine what the people, who have lost their houses, in Kamloops and Williams Lake, I can’t imagine how it’s affecting them,” said Burgh.

The Coastal Fire Centre says on a positive note the number of human caused fires is down this year. A number they hope doesn’t change with much of Vancouver Island facing a fire danger rating of extreme. 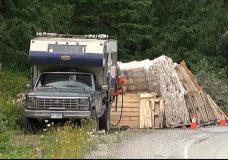 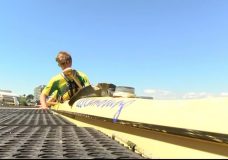