Hundreds of people gathered on the shores of Departure Bay in Nanaimo Tuesday to watch or take part in the annual Boxing Day polar bear swim.

“You are just numb, yeah that?s just the best way to describe it, just numb,” said Rick Mayer before taking part in the swim.

“I?m very nervous, I?m from the Middle East where it?s always warm and I?m doing this? I don?t know why,” said Anu Mayer with a laugh.

The air temperature hovered around 3 C and the water near 6 C.

Even Drew, or “Seaweed Man” was there. He has been a familiar sight at Vancouver polar bear swims for over 30 years.

“It?s tradition,” he said. “Seaweed Man has been alive for about 33 years. First one in Nanaimo though, actually just moved here.”

“I?ve been dragged out to this thing since I was a little kid so it?s just kind of tradition for me,” said organizer Brad Ney. “It?s been going on for a long time now, 58 years that?s a long time to keep something going like this but we?ve managed to keep going every year.”

When the time for the plunge came, about 190 enthusiastic people went barging into the chilly waters of Departure Bay.

“It?s a good way to beat a Christmas hangover.” said one woman.

“It was fabulous, my adrenaline was rushing so I wasn?t nervous but it was a lot of fun.” said her mother.

If you suddenly find yourself envious of these people, you?ll get your chance. Many communities on the island hold polar bear swims on Jan. 1, 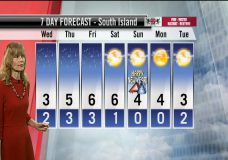 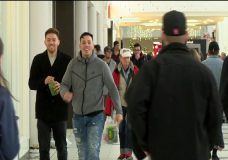