‘She’s lucky to be alive’: Woman walks away uninjured after being trapped by falling phone lines

A Nanaimo woman has remarkably walked away from a weather-caused incident that led to her being trapped between two fallen phone lines.

The incident took place on Thursday morning at around 10 a.m. when a woman was out for a walk near the intersections of Vancouver Avenue and Cypress Street in Nanaimo.

As she was walking down Vancouver Avenue, the weight of the recent heavy snow caused a large tree to topple over.

As the tree fell, it took out a set of telephone lines along with it and crashed to the ground, trapping the woman who was walking below.

“She’s lucky to be alive,” witness tells @CHEK_News after a tree crashed down on power lines in the heavy snow, taking out two poles, and hitting a woman as she walked by Thursday morning. @NanaimoFire says remarkably she walked away uninjured! #BCStorm @CHEK_News pic.twitter.com/Tczt9qBoip

According to witnesses, the tree branches clipped the woman and the lines fell on either side of her and although she was trapped by the incident, she was unharmed.

“She’s lucky to be alive,” one witness tells CHEK News, suggesting they were blown away by the outcome.

Nanaimo Fire Rescue and RCMP officers responded to the scene and a medical assessment was carried out on the woman once it was safe to do so.

Crews say that miraculously, she was able to walk away from the incident uninjured.

Correction: An earlier version of this story reported that power lines fell on the woman. BC Hydro has clarified that telephone lines, not power lines, were what fell. The story has been updated to reflect this information. 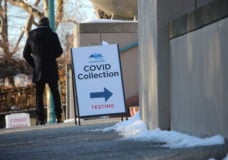 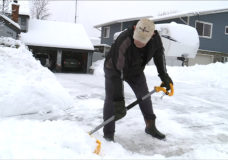