WATCH: Searchers covered new ground in Cowichan Saturday, looking for missing Cobble Hill father Ben Kilmer. They are refusing to give up hope that there is still something out there to be found. Skye Ryan reports.

“It’s tough it’s very emotional and very challenging to be out searching,” said family member John Dawson, who flew in from Calgary for the search.

“Nobody knows where he is so all you can do is look,” added Dawson.

“And hopefully we can find him alive and healthy,” said Ben Kilmer’s brother-in-law Ryan Corry.

“And if not I just hope we can find him at all so we can close this,” said Corry.

Since the 41-year-old father of two mysteriously vanished hundreds of Search and Rescue members and volunteers have bushwhacked through kilometres of forested terrain and underbrush.

Drones and helicopters were launched into the sky near where the electrician’s work van was found running, abandoned along Cowichan Lake Road May 16th.

That day just before 11 a.m. he was captured in surveillance video at a job site just over a kilometre away,  the van was seen empty but running at noon.

Blood and a smashed cell phone were later found inside the vehicle.

“Something obviously happened in that time frame,” said Ryan Corry. “Between 11 and 12?” CHEK News asked him. “Yes,” replied Corry.

The official search ended Monday, but friends and family have continued turning out day after day. Joining Ben’s wife Tonya who is so desperate to bring him home.

“We are creating an army and we are going to find my husband,” Tonya Kilmer told CHEK News on Tuesday.

“And there’s something going on here and we’re going to figure out what it is,” said Kilmer.

The toll of not knowing and the unending search is impacting her so severely now that her family has urged her to stay away.

“I’ve witnessed my sister get crumbled to the ground with emotion like there’s so much emotional weight on her shoulders that it’s forced her to the ground,” said Corry.

Ryan Corry says that is why searchers can’t stop looking.

The RCMP continue to investigate the young devoted father and husband’s mysterious disappearance, that’s left this community at a loss. 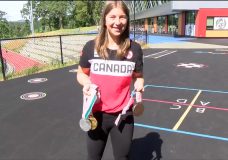 The search is on: Team Canada seeks out future Paralympians 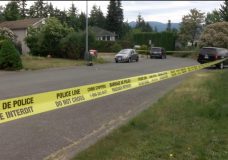