In photos shared by his family, Ethan Sampson is smiling from ear to ear, excited about life.

But the beloved friend, brother and son has been gone since 2020, after vanishing in raging flood waters that sent a torrent down the Cowichan River, and left the 28-year-old’s loved ones haunted, and searching devotedly to bring his body home.

“There’s probably been eight, nine searches. Nothing at all, no clothing, no nothing (has been found). No closure,” said the missing man’s father Darrick Sampson.

“It seems like he’s being held away from us. We’ve been trying and trying to get him but we just can’t find him here. The old people say the river can eat you up and this is what happened,” said Ethan Sampson’s uncle Jerome Crocker.

Sunday, a renewed effort to find him began on the Cowichan River.

“Yeah hopefully. It would be nice,” he said.

Search and Rescue BC volunteers in boats, used ground penetrating radar to scour the banks and surrounding debris that Samson disappeared in. Scrutinizing an area buried beneath sand, gravel and log jams on either side of the Cowichan River.

The missing Cowichan Tribes member was last seen leaving a cultural ceremony in the Quamichan big house, steps from the Cowichan River on the night of January 30th, 2020 during one of the biggest rain and wind storms in history. The river uprooting trees, and knocking out roads, as it overflowed its banks. RCMP believe Sampson was carried away in the rising dark water as he has never been seen again.
Ethan’s father Darrick Sampson visits the place where his son vanished nearly everyday.

“I know he cries. He comes down when he gets off work, and he stays down here for a couple hours before he goes home almost everyday. Yeah,” said Ken Sampson.

The Cowichan River is currently at the lowest levels it is expected to be all year, so officials withe Search & Rescue BC said the window to search is now.

“Once our rains come, it will come up fast,” said Ken Sampson.

Nothing was found by expert searchers on Sunday. But Sampson is planning more searches for the days ahead, before mother nature keeps this river from searchers for another year and holds Ethan’s loved ones in its grip even longer. 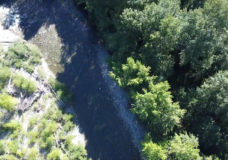 29 hectares of land near the Englishman River donated to Nature Trust of B.C. 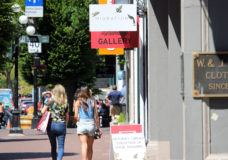