Sc’ianew First Nation has signed an agreement that allows them to explore the option of creating an Indigenous Protected Area in Metchosin’s Mary Hill area.

The standstill agreement, signed by the nation, District of Metchosin, Habitat Acquisition Trust, and Pearson College UWC, will give the Sc’ianew First Nation 18 months to exclusively explore the option of an Indigenous Protected Area at Mary Hill.

“It’s been a long time coming,” said Chief Russ Chipps. “We’ve been negotiating for a long, long time. I’m just glad it’s coming, not to an end, but to a start. It says we’re standing still but really we’re starting.”

The area of Mary Hill the nation is examining is a 136-hectare private land parcel currently held by the Department of National Defence (DND) in Metchosin, part of the ancestral lands of the Sc’ianew First Nation. It has been declared as surplus to DND needs and Sc’ianew is in negotiations within the British Columbia Treaty Process to see the lands returned as treaty settlement lands.

The Mary Hill property falls within the treaty negotiations, and if the Sc’ianew membership vote to approve a treaty, it would mean the nation has jurisdiction over that land.

“They [would] have lawmaking authority,” said the nation’s lawyer, Erin Thomson-Leach. “So if an Indigenous Protected Area is created at Mary Hill, it would be under Sc’ianew laws.”

An Indigenous Protected Area (IPA) is broadly defined as Indigenous-led initiatives that protect lands and waters. The creation of an IPA would protect the area’s environmentally sensitive and culturally sacred ecosystem.

“We’re talking about opportunities for eco-tourism, for educational centres, for healing centres, for habitat restoration, for research — you name it. The sky’s the limit as long as it’s conservation compatible,” Thomson-Leach said.

Mary Hill is part of the coastal Douglas-fir ecosystem, home to 15 per cent of the last old-growth coastal Douglas fir, according to Habitat Acquisition Trust. The BC Conservation Data Centre has confirmed 18 rare species in that area.

Public access to Mary Hill has been prohibited since the Second World War, Chief Chipps said. The first time he stepped on those ancestral lands was during these negotiations.

In addition to the 136 hectares owned by the DND, Pearson College UWC is offering to give back part of its lands to the nation – 14 hectares of it.

“[We wanted] to commit to action by saying we can, along with the DND, contribute a return of a portion of that land as part of our commitment to reconciliation,” said Craig Davis, president and head of the college.

An agreement like this, Chief Chipps added, is part of reconciliation.

“Reconciliation you hear on TV a lot and you hear people talking about it and it’s very rare to see it happen,” he said. “Reconciliation is treating each other like human beings. There’s no legal language for it, it’s just treat each other the same. Treat your neighbour as you want to treat your brother, your sister, your mother, like it’s easy to reconcile when you’re doing that.” 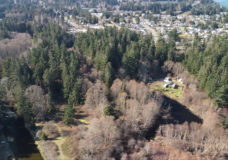 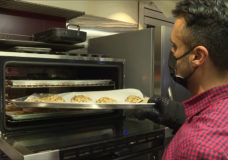