June 29, 2021 updated
File Photo
The Royal B.C. Museum has publicly apologized for a racist workplace culture and pledged to not only overhaul its internal practices but also shift from an organization that highlights the province's colonial past to a new institution that better acknowledges Indigenous history.

The Royal B.C. Museum has publicly apologized for a racist workplace culture and pledged to not only overhaul its internal practices but also shift from an organization that highlights the province’s colonial past to a new institution that better acknowledges Indigenous history.

Board chair Daniel Muzyka said the museum failed to respond appropriately to complaints by former employees of discrimination, racism and micro-aggressions within the workplace.

“The investigation in audit concluded there were acts of racism and discrimination at the museum,” said Muzyka. “Indigenous team members and members of other equity-seeking communities were subject to subjected to discriminatory behaviour. The behaviours and the conditions that fostered some of these acts were not effectively handled by people in positions of responsibility.”

The museum asked for an external investigation after the head of its First Nations repatriation department, Lucy Bell, a Haida member, quit in 2020 citing discrimination and white privilege within the organization.

That report, released Tuesday, found allegations by Bell and others were mostly substantiated, and that employees in the museum had suffered micro-aggressions within a workplace that was not culturally safe.

The museum’s curator of its Indigenous Collection, Troy Sebastian, also quit in February, calling it a “wicked place.”

Muzyka apologized to Bell by name, as well as others whom the museum has let down.

Museum CEO Jack Lohman resigned in February, and Muzyka said the organization plans to restructure its board processes and internal leadership. He said there will be several new hires, including a Vice President of Indigenous Partnerships, as well as new Indigenous staff in the repatriation, collections and archival units.

The museum also plans a larger transformative shift from a colonial organization that has chronicled the European settlement of B.C. for the past 135 years into a more modern organization that gives proper respect to the history, exhibits and contributions of the province’s Indigenous peoples, as well as contributions from other under-representative communities.

That’s expected to coincide with the redevelopment of the museum downtown, as well as a new provincial archives location under construction in the West Shore. 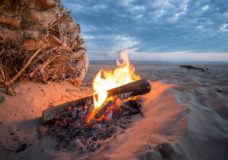 B.C. to ban all campfires until October amid dry conditions
Restrictions on gatherings, concerts loosen as B.C. moves into Step 3 of restart plan