People at Victoria’s Inner Harbour had the chance to see a colourful sight Thursday afternoon when they watched the flypast of the Red Arrows.

The United Kingdom-based team touched down at the Vancouver International Airport at noon. The team then did a flypast over Victoria before doing the same over Vancouver’s harbour.

A series of events took place in Vancouver this week to mark the visit including the screening of the UK documentary Red Arrows: Kings of the Skies followed by a Q&A with members of the team at Science World at TELUS World of Science.

The Red Arrows will have made stops in more than 20 cities in North America, including four in Canada, over the past 11 weeks. 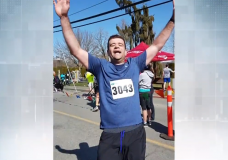 "It has definitely given me a new lease on life:" Kidney transplant recipient aiming to run Victoria marathon
'I accomplished my mission,' accused in Yonge Street van attack told police