WATCH: The Rotary Club of West Shore is gearing up to fly out to Haiti on Tuesday morning. For some, it’s their 16th trip to the Caribbean nation as part of a humanitarian trip to help two orphanages but as Luisa Alvarez tells us, they’re about $60,000 shy of their fundraising goal.

Retired Langford Fire Chief and Rotary Club of West Shore member Bob Beckett is one of six gearing up to head back to Haiti tomorrow.

“All the bags are just stuffed with tools that we will leave down there and let the locals use it when they are working at the orphanage and allow our team to use it when we come back down,” said Beckett.

They have their work cut out for them on their seven-day trip but Becket says they will hire locals to help and take on a divide and conquer approach.

“We will rebuild their battery inversion system because the power isn’t on very often, out in the country, they rely on the battery back up system, so we will be doing that and looking at their security so that’s at the Divine Hand Orphanage and at the Baby Jesus, we are expanding the height of the wall we are replacing the transformer and we are rebuilding a sitting reading area for the children,” said Beckett.

Their final objective is for both orphanages to be self-sufficient.

“There’s no sense and a secure compound for them if they aren’t going to be able to stand on their own two feet,” said Beckett.

Its a mission that’s well on its way to completion with the rotary club’s financial help and the leadership of Doris, director of the Baby Jesus of Prague Orphanage.

“With the egg-laying production, with selling of potable water, with the bakery that we’ve just finished and now with one of the projects being a large garden and fruit trees, we are hoping, along with the generous donors, that will allow us to purchase the property that Doris will continue without us,”said Beckett.

Their calculated a monetary goal to make that possible was $96,000 and to date, they’ve only raised only $30,000. However, Beckett says he’s optimistic.

“I guess its an attitude that we just won’t fail”

This trip is slated to be their last, but Beckett insists they won’t stop until they reach their goal and with everyone going having paid their own way, every dollar raised goes directly to the cause.

To donate you can go onto helpforhaiti.ca 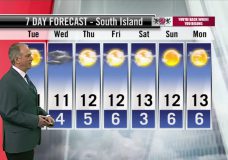 Ed's Forecast: Some clearing Tuesday but temperatures still a little off normal 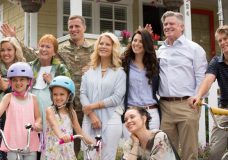