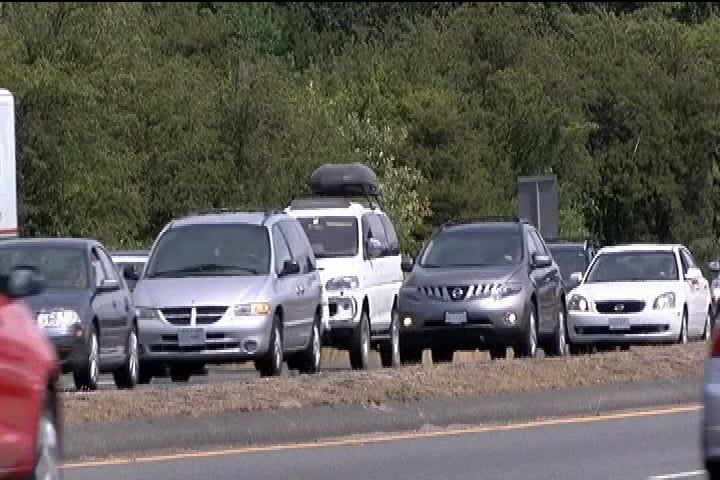 Some potentially alarming news for B.C. drivers. A new report suggests the average driver could see their annual vehicle insurance spike by 30 per cent by 2019. Andy Neal reports.

A report on ICBC says B.C. drivers could see auto insurance rates climb by almost 30 per cent by 2019 unless the government reforms the basic insurance system.

According to the 203-page report by Ernst & Young, the average driver could pay almost $2,000 in annual total premiums for auto insurance by 2019, “an increase of 30 per cent over today?s rates.” This assumes current trends persist, ICBC is expected to cover its costs from its premiums and significant reforms are not made.

The report, which was released on Monday, said B.C. has managed to maintain the same public auto insurance system since 1973 when Insurance Corp of B.C. was created.

However, increasing losses and the public’s unwillingness to pay higher premiums means the system may be unsustainable. There are also more accidents that are occurring on B.C. roads and average settlement of claims is rising. Claim costs for minor injuries have increased from 30 per cent to almost 60 per cent of total bodily injury claims costs since 2000. The average claim paid out for minor bodily injuries has risen from $8,220 in 2000 to $30,038 in 2016, an increase of 365 per cent.

“BC auto insurance premiums have been steadily increasing over the past six to seven years, in large part driven by the increasing number and average settlement of claims being generated,” the report said.

From 2011 to 2015, average premiums rose by $130 or 11 per cent. The average B.C. driver pays $1,550 per vehicle each year and “they would be paying much more than this if the true costs were being borne by consumers instead of being subsidized by temporary financial measures.”

B.C. drivers have been protected from the “currently required” 15 to 20 per cent price increase through government intervention and “rate-smoothing” mechanisms, the report said.

“This rate protection has eroded ICBC?s financial situation to a point where such efforts are not sustainable,” the report said.

The report said the Crown auto insurer needs immediate intervention by the provincial government. This includes capping payouts for pain and suffering minor injuries, changing red-light cameras so speeders can be caught with them, making high-risk drivers pay more for insurance, re-introducing photo radar and increasing efforts to catch distracted and impaired drivers.

The Liberal government used money from ICBC’s optional insurance business to hold rate hikes at 4.9 per cent last year when 15 per cent was required. However, the Ernst & Young report said subsidizing basic rates with optional coverage cash is “not a sustainable solution.” Optional insurance suffered a loss of $311 million in the 2016-2017 fiscal year. ICBC has not released its final figures for that year.

The gap between basic premium revenues and rising claims costs is $560 million, the report said, and the shortfall will hit $1.1 billion if nothing changes, as “there is no indication that the underlying issues will correct themselves.” The report said the “significant structural problem” in ICBC requires comprehensive change.

B.C. is the only province in Canada with a purely litigation-based insurance model, where drivers not at fault in a crash sue the at-fault driver for economic loss and suffering. The review suggested B.C. could look to Australia, New Brunswick and Alberta by capping payouts for pain and suffering on minor injuries from $4,000 to $9,000. ICBC could also increase medical benefits and accident wage.

Another suggestion would be for drivers to buy optional “top-up” coverage that would let drivers buy back the right to sue to replace any reduced claim money they could have received in court.

The report also recommends doubling the average number of random roadside breath tests for impaired driving and significantly bossing penalties, such as a six-month driving ban for drivers with blood alcohol levels of 0.07 to 0.10.

The report said ICBC doesn’t adequately price insurance for higher-risk drivers with poor records, “Having not incorporated any significant rate design changes since 2007.” The Ernst & Young report said ICBC should expand its plans for surcharges on luxury vehicles to get more revenue.

If these measures, and others, are implemented and the government immediately gets to work on overhauling the system, the report said ICBC rate hikes could go down to the level of inflation, which is about two per cent per year.

“This report makes it clear that ICBC has been in crisis for years, something which the former Liberal government largely ignored,” Eby said in a statement.

“Rather than addressing the serious issues facing the corporation, the BC Liberals used insurance fees as a rapidly growing hidden tax. Drivers have been paying the price.”

The NDP government is considering the recommendations in the report that could reduce accidents, injuries, deaths and claim costs.

“However, I want to assure British Columbians that we are not considering photo radar or moving to a no-fault system for auto insurance,” Eby said.

“There are some obvious solutions that we will look at. For example, the former Liberal government missed such basic ones, such as ensuring good drivers are rewarded while bad drivers pay more. We will focus on finding answers that put the corporation back on stable financial footing while maintaining our number one priority of making rates affordable.”

Eby also spoke at a press conference Monday afternoon where he added that the current issues are something the Liberal government passed on.

“The B.C. Liberals have been using ICBC as a bank machine, bringing money out of the corporation to claim better finances than are clearly the case,” Eby said.

Michael Mulligan, a lawyer from Victoria said another fix to the system would be forcing those who cause an accident to be personally responsible for paying a portion of the loss by adding a deductible.

“That would both save ICBC money, and would encourage people to drive more carefully so that they don’t wind up having to pay out of their own pocket,” Mulligan said. 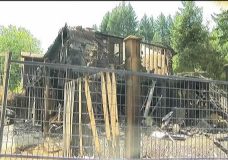 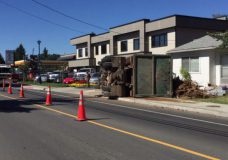 Dump truck flips over and spills debris onto Langford lawn