Posted: Apr. 7, 2020 7:09PM | Last Updated: Apr. 7, 2020 10:04PM
CHEK
WatchFor many religious groups, the beginning of spring is one of the most holy times of the year. But even with COVID-19 barring large gatherings, faith leaders are determined to come up with new ways to keep ancient traditions alive. Julian Kolsut reports.

Religious leaders are using the internet to find new ways to observe religious holidays in April.

St. Patrick’s Parish in Victoria and others are livestreaming their events during Holy Week.

“He is doing a mission live stream you can check it out online. Here at Holy Cross and St Pat’s I have recorded my homilies and downloaded them on the website. I’ve livestreamed mass. I am going to do a holy Thursday here live streaming it.”

Father William Hann says he has never seen such large changes during his time as a pastor.

“For the first time in my life, and my priesthood of 16 years, I am not celebrating the Triduum, which is Good Friday the Holy Saturday and Easter Sunday in a way with the people of God gathered in a church,” he said.

For many religions, this week is a big one.

“It’s a big week in all three Abrahamic religions,” said Peter Scales, from the University of Victoria’s Centre for Studies in Religion and Society.

“It commemorates the leaving of slavery once upon a time in Hebrew Mitzrayim, what we think of as Egypt. We have a virtual Passover Seder happening.”

Some were still heading to stores Tuesday to pick up some essential items for Passover.

“Our top sellers normally are the Matza,” said Leon Zetler of Aubergine Specialty Foods in Victoria.

“Jews had to leave Egypt in such a rush they weren’t able to let their bread rise, so traditionally for the eight days for Passover this is what we eat instead of bread. We’ve been supplying for all of North America [items online], there have been massive shortages this year.  Distribution has been upset by COVID-19.”

Congregation Emanu-El has even set up a phone line to deliver food for free.

“We’ve got someone who has made all of the symbolic foods for those who don’t have the wherewithal to go out and find some of the more unique foods,” added Rabbi Brechner.

Faith leaders say it’s vital to keep access open now, as many choose to lean on spirituality during the tough times. 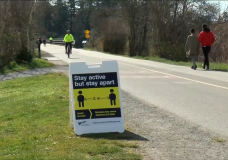 Flattening the curve: B.C. appears to be succeeding with COVID-19 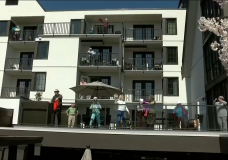 CHEK Upside: Seniors dance on their balconies in Qualicum Beach during COVID-19