It’s now located at Victoria’s Thunderbird Park, next to Wawadiťła (Mungo Martin House) where it joins the iconic works of Hunt’s brother and father, which he says is an honour.

“To me, Thunderbird Park actually should be a national heritage site because it’s one of the places where our culture was revived, where Mungo built this house and had a potlatch here with the government here to watch it,” he said.

“And the government realized we’re not nuts and allowed us to carry on our traditions. So, it’s where our culture was reborn.”

Originally carved in 1979, the pole was recently brought down for conservation treatment.

Hunt repaired and repainted it, and the Royal BC Museum took the opportunity to relocate it.

While the artist wants people to appreciate his work, he also wants them “to understand that we’re still here. We’re still carrying on our traditions.”

The process to move the pole took several hours on Monday, where it was from a covered area just outside of the museum and raised by crane to its new position.

“It was so exciting to watch. And of course, holding our breath the whole time because it’s such delicate work, but so historic also,” said Lou-Ann Neel, the curator for Indigenous Collections at the Royal BC Museum.

“I think what’s really exciting for people who are walking by, who might not realize, that the carvers who make these poles are still there. This is all very much part of living culture. And that’s one of the messages we really wanted to share with Thunderbird Park.”

Hunt hopes the totem poles will be preserved and looked after for many years to come to serve as a reminder of the importance of Indigenous art and culture in the province. 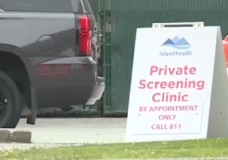