According to Environment Canada, temperatures at the Victoria International Airport reached 35.5 degrees on Thursday — smashing the previous record for the date of 30 degrees — and Castellan says heat like this is an anomaly for this time of year.

Along with the hot temperatures, Vancouver Island has been experiencing an extended drought which has resulted in a fire danger rating of “extreme,” for urban areas, including city parks, according to the B.C. government.

With the heightened risk, cities across the Island are setting up cooling centres and public health officials are warning residents to take extra caution over the weekend.

B.C. has been urging the public to watch for the effects of heat illness.

“It is not anticipated to reach the same levels we experienced in late June, early July this year but we do need to remind people the importance of taking care of themselves, looking out for others during these heat events,” says the Provincial Health Officer, Dr. Bonnie Henry.

Seniors and young kids are the most vulnerable during heatwaves and daycares are also trying their best to keep kids cool, healthy and overall happy.

Wildfire smoke has settled in over a large portion of the Island as well, triggering public alerts about lowered air quality as well.

The hot, dry conditions are reminding Vancouver Islanders of the summer of 1987 when a small brush fire near Prospect Lake grew to a threatening 18-hectare forest fire.

Fire crews were called in from across the South Island to put out the fire, with water bombers dropping fire retardant from above.

In that summer, 70 homes were evacuated as the fire loomed close to a multitude of properties.

Saanich Fire Department Assistant Deputy Fire Chief Brock Henson said fires break out almost every year, but the Prospect Lake fire is remembered as one of the most significant.

“That was certainly the last fire where we are talking dozens of hectares. We can get fires every year that are one to two to three acres, that sort of thing, but thankfully we’ve been able to get those things out.”

“Within Saanich, we have quite sufficient fire protection,” Henson added. “And one of the advantages of living in a more urban environment is fires tend to get reported to us very quickly.”

The extreme conditions are expected to linger through the weekend and officials are advising residents to be alert and take extra caution in order to minimize potential risks. 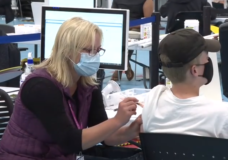 'It's going to be messy': Lawyers say mandatory vaccinations in workplaces is legal, but with limitations