File Photo
Despite an increase in inventory, prices are rising throughout Vancouver Island

The Vancouver Island Real Estate Board (VIREB) reported an increase in inventory of single-family homes and condos in April. However, despite this there was little relief for home buyers across the island.

Prices are currently rising throughout Vancouver Island, with a single-family home having an average benchmark price of $659,300 last month. That is up by four per cent from March and 22 per cent higher than in April 2020, according to VIREB.

Apartment prices are also up from four per cent in March and 14 per cent over the year, according to VIREB. The benchmark price hit $345,200 last month.

According to VIREB, the “pervasive lack of inventory” has made a strong sellers’ market and Buyers are facing tough competition.

“Buyers are understandably frustrated, and it’s also disheartening for realtors,” said Ian Mackay, VIREB President in a press release Monday. “Whether they’re buyers or sellers, we want to make our client’s happy.”

The British Columbia Real Estate Association (BCREA) says it doesn’t see inventory improving until more becomes available online. It, along with other real estate boards are pushing with policy makers to speed up the development process so that communities can meet demand faster.

“We have seen that demand-side policies like taxes and higher mortgage rates and just not working,” said Mackay. “The best route to making housing more affordable, particularly for first-time buyers, is to increase supply. It’s not a quick solution, but it’s the only one that makes sense long term.”

Parksville-Qualicum also saw an increase of 17 per cent from last year at $743,400 for a benchmark single-family home. 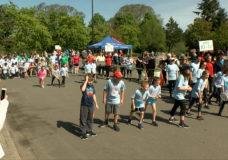