March 24, 2020 updated
CHEK
WatchIt was an ambitious target, one million dollars was the goal for the "Rapid Relief Fund" to keep local charities afloat during the COVID-19 crisis.

The Rapid Relief Fund started by the Victoria Foundation, Times Colonist and the Jawl family has surpassed its goal of $1 million, and is now aiming for $2 million.

The funds raised are going towards charities, who are feeling the financial squeeze of the COVID-19 pandemic.

The first million goes towards a few pre-selected charities, like Victoria’s Salvation Army.

“Something like this to come through is a real gift from this community, a real gift from good for us, to keep our services going,” said Sheldon Feener, executive director at The Salvation Army in Victoria.

On Monday they were handing out food at their Addictions and rehabilitation Centre in downtown Victoria.

“We feed them right now during these times through our community doors [due to COVID-18]… we have now prepared nice to-go boxes, it’s a nice warm meal for them, and we will feed them three times a week.”

The speed to get to the first million left many inspired by Greater Victoria’s generosity.

“I think the conversation started at a million in a month,” said the Victoria Foundation’s CEO Sandra Richardson.

“Then it went to a million a week, and who would have thought it was a million in a weekend.”

The foundation will now set up a board to see how the next million will be distributed.

“The way we are [distributing is] a small advisory committee, so, first of all, we have to make sure the organization will be able to spend the money or use it immediately so we are trying to touch the ones that are in need the most right now so we have two staff people on the ground doing that research so they’ll bring it together to that group.”

The foundation credits CHEK with helping get the word out.

“As soon as we heard about it we wanted to get involved. A fund like this, there is never been a greater need.”

The fund was sitting at just over $1.2 million Monday afternoon, but knowing Victoria, it won’t be for long. 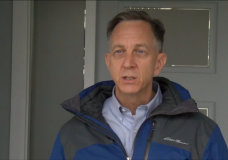 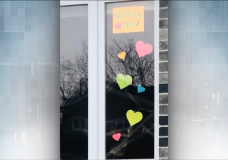 CHEK Upside: 'Hearts in the Window' brings thousands together