Randal Warnock was beach combing on Brown Island when a juvenile grizzly attacked him.

“Well I just couldn’t believe it, it was just surreal” said Randal Warnock. “It happened like a blink and then it was over.”
Randall Warnock was recounting today what happened Monday night when he was attacked by a grizzly bear.
“And he was about ten feet away when he came out of the bush and he was on me in seconds.” he added.
Warnock is a BC Ferries captain and was on his own boat heading to a shift in Bella Coola from Port Hardy Monday night.
He pulled into Smith Sound, north of Cape Caution to wait out some bad weather, anchored, then took his skiff to do some
beach combing on Brown Island, a small island not far from the mainland.
“Found a scotchman on there, so I picked up the scotchman, it’s like a boat bumper and thought oh ya this is good I’ll take it home, I was walking out of that little 30 foot clearing and I heard a crack behind me in the forest so I turned around and right where I picked up the scotchman a bear exploded out on the beach, a grizzly bear.” said Warnock.
He describes the bear as a juvenile that went straight for his legs.
“He grabbed a hold of my right knee and got a good grip and just started shaking me like a rag doll.” said Warnock.
He says the encounter lasted about a minute and that he knew he had to keep standing, which he did.
He had a knife but dropped it, so as a last resort, he punched the bear.
“His head was like right here so I waited a second and just lined up and punched him as hard as I could right in the nose and he stood back and backed off about two feet and he was standing like from me to you, he’s right there and he’s really animated like his head is bobbing around like he’s trying to decide whether to go at me again.” he added.
The bear then took off leaving Randall in shock and with serious injures to his legs.
He managed to get back to his boat where he called the Coast Guard and ended up in Port Hardy hospital for two days.
“Thank goodness he sort of, he just knew what to do you know.” said his sister Linda.
“I was just lucky that way, I was just lucky, very, very lucky.” continued Warnock.
The ferry captain is now taking a few weeks off work to recover. 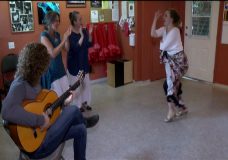 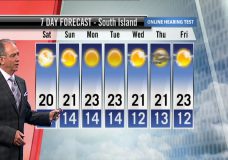