November 25, 2019 updated
Chek
WatchBetween Western Forest Products strike and the Mosaic shut down 5,000 workers are off the job

A contractor moves a final logging truck into Mosaic’s yard in Nanoose Bay.

The trucks may be parked now for a while after workers were told starting tomorrow they’d be shut down for an indefinite time.

It comes as the Western Forest Products strike nears the end of its fifth month, prompting Port McNeill’s mayor to pen a personal letter calling for an end to the strike.

“It has been phenomenal how communities have come together but it’s heartbreaking to see,” said Gaby Wickstrom.

“I know families that are paying their bills with IGA gift cards that have been donated to them.”

Wickstrom says the Western Forest Products Strike has already led to some families moving away. She says changes to forestry policy hasn’t helped.

“I suspect that the next 6 to 12 months we’ll be pedal to the metal for us as elected officials advocating for our communities and letting them know what the effects of those policy changes are to our forest industry.”

Port Alberni resident Lunn Lyons is among the subcontractors impacted by the strike. He, too, has been out of work for five months but is close to retirement and says he’s concerned for the younger workers.

“My heart goes out to the families that are coming up to Christmas under these conditions. I got friends who are talking online. They’re losing their houses. Their banks are asking them to move out. It’s a terrible thing. Brutal.”

He says it’s time the two sides reach an agreement but he believes the industry is broken.

“They’re shipping our raw logs down to the United States and all over the world. Like, come on value-added. It’s our forests. We deserve to have the right to work. They’re shipping away our jobs.”

During his address at this weekend’s NDP convention, Premier John Horgan said it’s time for the forestry industry to change how it operates.

“We need to create more jobs, more innovation and that’s cross-laminated timber. How can we take waste-wood and create a whole industry out of it? We’re ready to go, we’re ready to support that, workers are ready to do that. The forestry industry needs to get on board.”

It’s a possible way forward, for thousands of workers desperate to be back on the job. 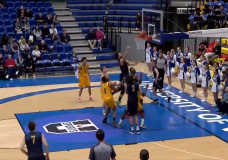